Long ago, Arena was a resident of the peaceful Planet Zant. She was kidnapped by Etelgar and brainwashed into believing that her planet was destroyed by Ultraman Ginga, therefore setting up a goal to hunt every Heisei Ultra in existence as revenge and began to hate Ultras.

When they made their stop in Ginga's Universe, both try to hunt Ginga and Victory but the two Ultra Warriors were rescued after Musashi Haruno slipped into their castle assisted UPG. Arena soon invaded their base and personally try to hunt the Ultra Warriors but the intervention of Sho's Victorium purifies her brainwashing, leaving the Etelgar's false memories intact. Etelgar re-brainwashes her again and Ultraman Zero took the fight. Once the two retreated, Arena broadcasted her threat to the public to surrender Ginga and Victory in exchange of the captured Ultra's lives. During that time, Ultraman Ginga Victory was newly formed and after UPG and Musashi invaded their Space-time castle, the captured Ultras were released. With others left behind, Ginga Victory and Cosmos confront Etelgar and managed to fully purify Arena from Etelgar's propaganda, allowing Cosmos to bring her to safety.

In the aftermath of the battle, Arena thanked the UPG and Ultra Warriors as Musashi/Cosmos escort her home. 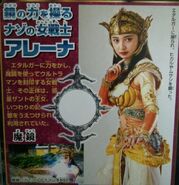 Arena bids farewell to Hikaru and others

Arena waves goodbye to her friends 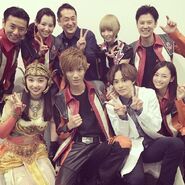