Arakunia and Froguros were Space Beasts sent by Dark Mephisto as subjects to test the Night Raiders in action, specifically Mizorogi (who was deputy captain of the Night Raiders at that time). Two Arakunias were spotted in a factory where the big one attacked the Night Raiders with its tongue after the smaller one was killed. However the monsters was no match for the Night Raiders' weapons and were quickly killed by their gunfire. Apocalypse

It was revealed back in Shiori's past as a policewoman, she encountered a smaller Arakunia, feeding on garbage as she mistook it for a bear before the beast attacked her. Despite this, the Night Raiders came into rescue and killed the monster and Shiori was later recruited moments later. Shiori - Lost Memories - 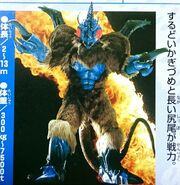