One day Mad Go-Ne sent the monster Antron to a remote village in the Japanese countryside to exterminate Naoki. Four missiles were launched from his wrists and Antron proceeded to chase his plane. Naoki alerted PAT to the situation, causing them to take of in their jets to intercept the insect monster. Before long Naoki managed to summon Jumborg Ace and overpowered Antron until the insect monster swung his sword at the robot hero. Antron kept swinging and Jumborg Ace used his Jumborg Saver to counter him. Neither giant could hit each other during the clash, Mad Go-Ne beamed down from his space ship to summon fog, causing Antron to separate into pieces and vanish into it. While Jumborg Ace left, Antron used his various pieces to turn them into villagers. Thanks to three kids that stumbled upon them it became apparent that the remote village was actually a hidden Alien Gross base. Naoki was told this by one of the kids radioing him and used his plane to ward off Antron from getting to them. Mad Go-Ne then told Antron to reform into one body to attack Naoki's plane. The Alien Gross base proceeded to assist the insect monster by firing cannons, forcing Naoki to summon Jumborg Ace. The robot hero disarmed Antron of his sword, but was quickly bashed to the ground. Antron retrieved his sword, allowing Jumborg Ace to assault him in melee. The hero began to run out of energy, granting Antron the upper hand until PAT arrived and caused him to flinch by flying by him. This allowed Jumborg Ace to tackle and disarm him once more. The Beam Emerald was used to cause Antron to explode, forcing Mad Go-Ne to retreat. 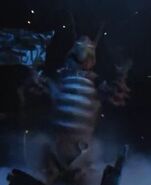 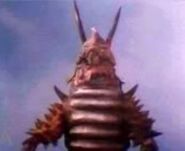