Antlar[2] (アントラー Antorā) is an ant/beetle-like Kaiju that terrorized the civilization of Baradhi. It was stopped by Ultraman in part thanks to the Stone of Baradhi left by the "God of Noa".

Antlar's name originates from the combination of the words "Ant Lion", which is the name of a species of ant-eating fly.

During a meteor investigation mission deep in a desert region, the SSSP was ambushed by the monster Antlar, whom had dug an antlion-like hole in the middle of the desert. They tried attacking the massive insectiod monster with their lasers, but Antlar's rough hide was impenetrable by far and proceeded to fire his magnetism ray from his mandibles, sucking in The Science Patrol's weapons. Luckily, the Science Patrol managed to escape while Antlar burrowed away.

While on their mission, the Science Patrol then found an ancient civilization that was being attacked by the monster too, to which they learned was called "Antlar". They also learned that the civilization hailed an Ultraman-like figure called the "God of Noa" as a prophet, naming their city after a blue stone called Baradhi.

Suddenly Antlar returned, attacking the City of Baradhi. Hayata transformed into Ultraman to face Antlar, but the giant was tricked countlessly by Antlar's burrowing and his magnetic ray to reel Ultraman in. Ultraman managed to tear off on Antlar’s two pincers and fired a Spacium Beam, but Antlar's exoskeleton was too tough and the two continued to fight. Realizing Ultraman was running out of time, the Princess grabbed the Stone of Baradhi and asked the Science Patrol to throw it at Antlar in hope of destroying it. As soon as they did, a shower of sparks erupted from all over Antlar's body, ending its life and destruction. The Blue Stone of Baradhi

In this series, Antlar was a monster that destroyed the city of Baradhi long ago. In a prophecy from the "God of Noa", it was stated that Antlar would return in the future to punish those that polluted the environment. Four thousand years later, Antlar returned in Tokyo, attacking the city with his magnetic beam with little to nothing that DASH could to stop it as Antlar left to rest.

Once DASH found out that the Blue Stone of Baradhi was the only thing that could weaken Antlar, the monster returned to attack once again. While DASH's weapons were powerless, Kaito turned into Ultraman Max to fight Antlar himself. It seemed the two were evenly matched until Antlar used his magnetic ray to his advantage on Max, attacking him with a transformer and even blocking his Maxium Cannon. Finally once DASH found a Stone of Baradhi, they fired it at Antlar, greatly weakening the monster enough for Ultraman Max to cut off one of its pincer mandibles with his Maxium Sword before finishing it off with the Maxium Cannon. Prophecy of Baradhi

In this series, Antlar was a monster owned by an Alien Babarue Reionics who used him for his own sadistic pleasure, attacking the ZAP SPACY and its captain. However, Reimon appeared in his Burst Mode as well as his Gomora and both Gomora and Antlar fought hard and brutally to a standstill, trading blows. Once the ZAP SPACY was reunited, Antlar tried to attack its main ship the Spacy Pendragon. Gomora however transformed into Reionic Burst mode and viciously attacked Antlar, tearing off its pincers. Greatly weakened by his monster's state, Alien Babarue called back his Antlar to safety and retreated. Disturbing Reunion

During Kanegon and Ai Asama's travel into the past, Alien Babarue tries to trap them using Antlar's antlion pit. Kanegon summons Red King, passing the monster's control to Ai as the young boy use it to kill Antlar in a single kick. The death of his monster forced Babarue to teleport away, just as the Reionics Hunter arrives.

Antlar is one of Ultraman Belial's 100 Monster Army. He was first seen rising out of the ground in a shot from the Monster Graveyard along with Alien Baltan, Gomess (S), King Joe Black, Nova, and Verokron before being re-captured by Ultraman Belial. He then teamed up with King Silvergon, King Goldras, King Guesra, Magular, Gomess (S), Alien Baltan, Zetton, Gudon, Twin Tail, and Arigera to take on Ultraman. Antlar was killed by Ultraman's Ultra Attack Beam. Mega Monster Battle: Ultra Galaxy Legends The Movie

Antlar reappeared in the director's cut of Ultraman Saga. The footage first appeared in episode 39 of the special series, Ultraman Retsuden, and later in Ultraman Zero: The Chronicle.

Antlar is seen as one of the many monsters revived by Alien Bat and Sphere to battle against the Ultra Brothers, with Antlar battling with Ultraman. Antlar fought with Ultraman for a short period of time, but was eventually killed by Ultraman's Spacium Beam. Ultraman Saga

Antlar was among the crowd of monster Spark Dolls that cheered Ultraman Ginga on as he fought Dark Galberos. The Closed World

Tomomi Kuroki, the general manger development of Ichinotani construction, was trying to change Furuboshi High School into a composite type resort alongside Seiichiro Isurugi, Misuzu's father and Shingo Kuwabara. After Zaragas emerged, Tomomi tried to escape the school, only to be DarkLived into Antlar. He fought Jasyuline and was winning since Jasyuline's three hosts were completely unsynchronized, but Ultraman Ginga later took over. Right as Ginga was about to finish him off, Ultraseven Dark and defeated Antlar with a Wide Shot, reverting him to his Spark Doll form. The Jet Black Ultra Brothers

Antlar appeared as a Cyber Card in the final episode of Ultraman X. After Ultraman X spoke out to Gomora and striked Greeza right in the center of his chest, Antlar, along with all of the other Cyber Cards, traveled to X and united with him. Cyber Antlar's power was used to help form the Hybrid Armor and power up the Ultimate Xanadium to defeat Greeza once and for all. Antlar, along with the numerous other Cyber Cards and Spark Dolls, then appeared and thanked Daichi as he thanked them. The Rainbow Land

After Zaigorg's victory against Ultraman Exceed X, Gorg Antlar was created by Zaigorg alongside Gorg Fire Golza and five Tsurugi Demaagas. While the Demaaga army went rampaging in the worldwide, Gorg Fire Golza and Gorg Antlar accompanied their creator towards the Carlos Communications to destroy the stone that had imprisoned Zaigorg before. As it seemed that the front line of defense (Xio via Cyber Cards) proven ineffective, Ultraman Tiga appeared and join the Sky Musketty in a combat against Gorg Antlar. Tiga transformed into Sky Type to bring down the now flying Antlar. He was shot down with one of Tiga's Runboldt Beam Shells. Now on the ground, Tiga attained Power Type to match the beast's strength. After punching of one of Antlar's pincers, Tiga returned to Multi Type, where he finished off Antlar with his Zeperion Beam. As Antlar exploded, his removed pincer finally landed among the fire where he once stood. Ultraman X The Movie: Here He Comes! Our Ultraman

Antlar's Kaiju Card was used by Jugglus Juggler with his Dark Ring as part of his plan of waking up Maga-Grand King. The Lord of Earth

His Kaiju Card was later used by Alien Nackle Nagus in a card game alongside Jugglus Juggler and Alien Metron Tarude. The Forbidden Forest 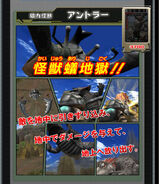 Monster Antlion
Antlar White
Antlar was one of the many Kaiju to appear during the Kaiju Busters series. A subspecies appeared in this game called Antlar White (アントラー白 Antorā Shiro). 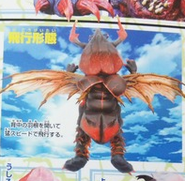 Antlar was one of the many Kaiju to appear during the Kaiju Busters series. A subspecies appeared in this game called Antlar White (アントラー白 Antorā Shiro). Kaiju Busters

Antlar appeared in chapter 2 of Another Genesis. After being impaled by a shard of light and turning into a gigantic monster, he battled Ultraman on a desert planet and was brutally killed when Ultraman ripped the shard from his body and repeatedly stabbed him to death. Ultraman: Another Genesis

While on a distant planet at night, Baltan Battler・Barel, Guts Gunner・Garm, and Magma Master Magna were talking about their last hunt with Eleking when they suddenly saw Antlar's Magnetic Beam that disabled Guts' communication with Djent and pulled Magna in before it suddenly stopped and, when the sun rose, it revealed itself and started manipulating the sand to pull in the trio. Garm pulled out his Energy Rifle but, before he could fire it, it got pulled in by Antlar's magnetic beam and he destroyed it with his mandibles. Garm then remembered the last time he hunted down and Antlar but, at that time, he had a partner: Nodachi Zamsher. He used his katana, which glowed at the moment, and sliced Antlar in half. Barel then decided to let himself be pulled in by Antlar then he attacked the Plasma Shards near the monster's mandibles. After that, Antlar went crazy and destroyed the architecture on this planet. They then split up and strategically attacked the monster's Plasma Shards with Barel getting the ones near its neck and left arm with his sword and Cyclone Saucer and Magna destroyed the ones on his back with his Force Sabre. Garm fired at Antlar with a Hawkeye Shot from his backup Energy Rifle but, somehow, the Plasma Shard reflected it. Antlar then started to pull them again but then Garm activated the self-destruct sequence on his Energy Rifle and, not only destroyed the Plasma Shards on its right shoulder, but also saved Barel and Magna from certain doom. With Garm's weapon gone and Barel almost on the verge of collapse, Magna was about to finish off Antlar himself when the Dada Team shows up. Dada B and C destroy Antlar's mandibles with a combination of Dada C's electric attack via Limiter and Dada B's Giant Cannon, and Dada A destroys the final Plasma Shard with his Plasma Cannon.

Antlar appeared at the very end alongside Red King, Dinosaur Tank, Neronga, Eleking, Verokron, King Joe, Gandar, and Super Earth Gomora and are about to face off against the trio and many Alien Metron, Waroga, Kyrieloid, Alien Zarab, other Alien Guts, Alien Babarue, Alien Chibull in exosuits, Yapool, Alien Temperor, Alien Nackle, and other Alien Magma.

Antlar is released many times through the Ultra Monster Series. Some of his older figures make him either brown, orange, green and even some black. The repaints give him a more accurate look. He has either 3 or 4 points of articulation depending on which one you get. In 2013 he is released as part of the Ultra Monster 500 series. He has 3 points of articulation and for color is a little darker grey. He is #13 in the series. 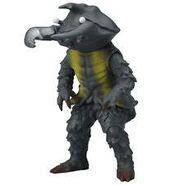