―Anti's speech to Gridman as he transforms into Gridknight

During the tenth episode, Anti's obsession with defeating Gridman evolved into a desire to protect him. This, combined with Anti's own copy ability transformed Anti's Kaiju form into a Gridman-like form dubbed Gridknight (グリッドナイト Guriddonaito).

Anti, now grown up and going by the name Knight (ナイト Naito), reappeared with Anosillus the 2nd in SSSS.DYNAZENON to protect that world from Kaiju invasions.

As a human, Anti is quiet, rarely speaking. He is also very gluttonous, eating several plates of food in one sitting. Due to his nature, he also devours the food with no sense of table manners, devouring it all like an animal. Anti also questions his role, whether he is human or not. He is also curious, as he asked Utsumi what an apology is.

Since he is created solely to fight Gridman, Anti displays an irrational hatred for the Hyper Agent in both his human and Kaiju forms. His hatred is so great, Anti will even attack a fellow Kaiju if they stand between him and Gridman.

He is also very loyal to Akane, persistently staying with her, and even protecting her during a forest fire, despite her callous and abusive response to his presence. However since his sole purpose is to fight Gridman, Anti would refuse to murder people just to fulfill her petty grudges.

When Akane ends up outright disowning him as one of her Kaiju, Anti finally leaves her to find his own path in life, recognizing that he had to have been given sentience for a reason. With Calibur and Akane's words, he finds himself to be more than just another Kaiju born of Akane's malice, which allowed him to transform into Gridknight.

In SSSS.DYNAZENON, the older Anti, now known by the name Knight, retains his stoicism and keeps his cool in most of the situations. He is protective of the 2nd, acting as her personal bodyguard, but denies any other relationship with her. Yomogi's act in pointing this out and assuming them to be a couple provokes Knight to wrestle the young boy despite his partner being open to this suggestion.

Anti was created by Akane Shinjo, with the ability to learn from his opponent. In their first battle, Anti easily bested Gridman in battle. This was mainly because Yuta Hibiki believed Anti was a real person and found himself unable to fight. Despite the use of the Gridman Calibur, Gridman was defeated and vanished, leading Akane, Rikka Takarada, and Sho Utsumi to believe Gridman was dead. Akane treated Anti to a meal at a restaurant as a reward. However, Gridman survived and returned the next day, where he challenged Anti to a rematch. Through use of Max's weapon form, the Battle Tracto Max, they formed into Max Gridman and fought to a standstill, with each fighter hitting their limits simultaneously and Anti reverted to his human form. Akane threw her bento at his face in the next morning out of disappointment. Defeat

He continued to stay outside of Akane's house, no matter what she would say, even when she threw her phone at him. Anti was later ordered to kill the four man video podcast group Arcadia, but refused, only caring about killing Gridman. Instead, Akane created another Kaiju for the job. When Gridman challenged the new monster, Anti attacked the two of them. After Max Gridman destroyed the new Kaiju, Anti attempted to attack again, only for his time limit to expire, forcing him to resume his human form. Disappointed that the last of the Arcadia group was not dead, Akane threw her phone at him again. Suspicion When Akane was caught in a forest fire, Anti appeared to get her to safety and gave her his scarf before going to fight Gridman. However, after the battle was lost, Akane threw his scarf away and it was lost in the destruction. Provocation

Anti was sent to personally kill Yuta when Akane confirmed her suspicions of him being Gridman. On the way, he met Rikka, who decided to give him food and a bath at her house. He then went out to hunt Yuta and when he found his target, Anti attacked him without transforming. He was held back by Max and Calibur, who convinced him that Gridman was not around and that Yuta was just a human. Anti then went back to Akane, who threw her phone at him again. Contact

Anti tried to get Gridman to fight him by going to Yuta's school and harassing him. However, he was told that Gridman would come only if there was a Kaiju around, so he left and stole Yuta's Special Dogs. When he was eating, Akane saw him and kicked him in the head, telling him not to be so loud at school when he demanded to be ordered to kill Gridman. Tired of waiting around, Anti broke into Akane's room and designed his own Kaiju, Diriver, that Alexis then brought to life. Using it, Anti lured Gridman out. The plan was successful, with Gridman being joined with Sky Vitter and they combined into Sky Gridman. Anti, who was standing on the Kaiju, transformed and was now capable of flight, copying Gridman once more. Despite the Kaiju teaming up, Gridman and Sky Vitter defeat the two. In anger at him entering her room and creating a Kaiju, Akane sent Alexis to punish Anti, who did so by taking his own buzzsaw and slashing his face with it. Bested, Anti could do nothing more but stumble away in pain. Scheme

After this attack, Anti managed to get proper bandages and a gauze to cover up his injured eye, though he was left exhausted. He arrived at the Junk shop, asking for that girl, much to the surprise of the Neon Genesis Junior High Students. Orie Takarada arrived, and served him a plate of food, after the human lookalike passed out from exhaustion. After leaving, Calibur reveals to Borr that he now has Anti's phone number. After Full Powered Gridman's fight against Mecha Ghoulghilas, it is revealed Anti was watching the battle. Confrontation With the appearance of the Bujack, Anti expected Gridman as usual, but his opponent did not appear. Anti then went to the Junk Shop, demanding the Neon Genesis Junior High Students to bring Gridman out, but they responded by telling him that Gridman was 'on vacation' because of that monster. Anti tried to kill it with his buzzsaw, but each of his attacks failed. After Bujack's defeat, he calls Calibur over the phone, demanding Gridman once more. Calibur told him that Gridman doesn't need to come and fight him because Anti is a living being with heart. Anti dismisses the claim, and instead states that he is a Kaiju. Dream

Anti fights Calibur in the mist and is defeated, but Calibur refuses to finish him off. Instead, Calibur asks him what he would do after defeating Gridman, a question Anti did not think of. Anti later had one last battle with Gridman, who once again beat Anti. Gridman also refuses to kill him, believing that he is not really a Kaiju. After that, Anti meets Akane at the restaurant they went to, wanting to pass an umbrella to her after seeing her in the rain. Instead, she tells him that he is a failed creation and tells him to leave, since Kaiju aren't supposed to get attached to humans. This gives Anti the resolve to find his own meaning in life, leaving Akane for good. Anti later shows up to protect Gridman from a new Kaiju, realizing that he was born to defeat Gridman and lives to do just that, but to do so, they both need to stay alive. Anti then transformed into an entity similar to Gridman himself. Anti could feel that the Kaiju represented Akane's heart itself and remembering what Akane said to him, Anti was able to read the monster's erratic movements where Gridman could not. He defeated the threat by slicing it in half. For being the knight that protected Gridman, his new form was dubbed "Gridknight". Collapse Anti visited Yuta in the hospital and he was treated with some hostility from the others, besides Max, who wanted his help to deal with the attacking monster army. He then went out to fight them as Gridknight but was soon overwhelmed until Yuta recovered and transformed into Full Powered Gridman. Decisive Battle

Anti was later given the task to deal with Akane's Kaiju form while Yuta/Gridman looked for Rikka and Utsumi, though he did state that he vows to defeat Gridman before the end of his life. After a short struggle, Anti dived into Zegga's inner 'face' and pulled Akane out of it, but was immediately impaled by Alexis. During Gridman's final transformation, he gained an Acceptor to perform the Access Flash with him.

After the final battle, he was saved by Anosillus the 2nd. His bandages fall off and reveal a new eye with a blue iris. Awakening (Finale)

Anti, now known as Knight, entered the world after the Kaiju Eugenicists' Kaiju had weakened a certain barrier around it. What Is This Pain? Seeing Dynarex and Bullbind fighting, he transformed into Gridknight and intervenes just as Dynarex was about to be defeated. Gridknight's abilities were superior to Bullbind's and forced it and the Kaiju Eugenicists to retreat. He then attempted to fight against Dynarex, assuming it was another Kaiju, but left as his time limit was running out. Later on, he and the Second approached the Dynazenon pilots with the latter offering their help, but they were turned down as they seemed suspicious. Knight got abrasive and left them, saying the injured will only get in his way. They later teamed up to fight and destroy Bullbind anyway. What's Our Reason for Coming Together?

After Garnix's defeat, life seemed to go back to normal as the Kaiju Eugenicists ran out of Kaiju seeds. Chise once tried to go to school again but found herself unable to step into the premises. Knight and the 2nd inform her that they will be leaving with Goldburn soon, as Goldburn should not exist in a "normal" world. Knight then appeared when Sizumu attempted to attack Yomogi and Yume. Sizumu defeated Knight and unleashed Gagula to destroy the city. While Yomogi, Yume and the Second take care of Gauma, Knight fought Gagula as Kaiser Gridknight but lost. What Wish Can't Come True? Yomogi and the others then went to retrieve their parts of Dynazenon to pilot together for the last time. Even with their teamwork, they were still being overwhelmed by Gagula until Yomogi used Instance Domination on it to force it to move its mouth up and provide the others with an opening to attack. With everyone's efforts, they manage to defeat Gagula and the Kaiju Eugenicists. However, Dynazenon loses its color and Gauma seemingly dies.

Three months later, they visit the bridge where Gauma made his home before Knight and the 2nd leave with Dynarex and Goldburn. They arrive in another Computer World where Dynarex reawakens. What Was I Entrusted With?

As a Kaiju created to attack at Akane's orders, Anti was born with a human form. In battle, upon defeat or exhaustion, he will be forced back into this form.

Anti's original/true form. He was a monster created to mimic and thus counter any of his opponent's abilities, specifically Gridman.

Brute Strength
Gridknight
An evolution of Anti's Kaiju form. He becomes similar to Gridman, in form and abilities.

Due to Anti's evolution into Gridknight, he is capable of arming himself with an Assist Weapon (アシストウェポン Ashisuto Uepon) in the same vein as Gridman. 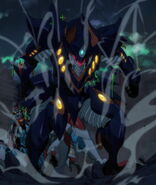 Anti gets impaled by Alexis・Kerib

Anti's eyes at the end of the series