None
Antales (アンタレス Antarezu), also known as Antares, was a Kaiju that appeared in Ultraman Leo.

Antales and Ultraman Leo were engaged in combat in the middle of a forest. Antales and Leo were both equally matched in combat, and neither were able to beat the other until MAC arrived. Antales grabbed hold of Leo with his pinchers, and squeezed Leo's shoulder with his tail. Dan ejected from the plane, and threw his cane (which was loaded with an explosive) at Antales's tail. Antales let go and MAC opened fire. While Leo was holding his shoulder in pain, Antales made his retreat. Not too long afterwards, a boy appeared in Gen's dojo, and battled several people without warning. His style was similar to Antales, and he seemed to have sort of a tail. Later on, Antales emerged again in a similar forest. MAC was quick to respond, bombarding Antales with bullets. However, Antales quickly dispatched the crafts by firing flames from his tail, causing several casualties. After long sessions of training with other MAC members, Gen challenged the strange boy. The two fought until the boy revealed his tail, and his secret. Realizing the boy was Antales, Gen and MAC chased him outside. The boy transformed and began to attack. Antales attacked the city, but not before Gen transformed into Ultraman Leo once again. Though Leo had the upper hand, Antales still put up a fight. He tried to use his tail, but Leo used his Leo Kick and severed it. Using the pincher on the end of the tail, Leo threw the tail back at Antales, decapitating him. Although victory seemed imminent, Antales slowly and persistently walked towards Leo, holding his head in his hands. Finally, he stopped, dropped the head, and exploded. 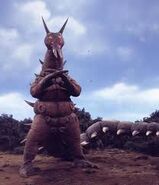 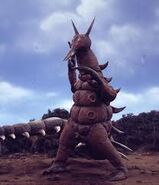 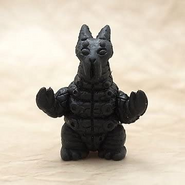 An Antales eraser
Community content is available under CC-BY-SA unless otherwise noted.
Advertisement