Masaru Sakamoto
Anosillus the 2nd (アノシラス（２代目） Anoshirasu (Nidaime))[1] is a character in SSSS.GRIDMAN. She is a mysterious girl who somehow knows the secrets of the world. Similar to Anti, she is actually a Kaiju in human form. However, she was not created by Akane Shinjo and Alexis・Kerib.

Anosillus the 2nd, now grown up, reappeared with Anti, now known as Knight, in SSSS.DYNAZENON.

Not much is known of her origins, but she states that she has been watching events unfold for a long time, even before Tsutsujidai was made. She also met Yuta Hibiki at some point prior to his amnesia.

Prior to her on-screen introduction in episode 6, she made several cameos as a background character throughout previous episodes.

Anosillus was looking for Yuta and found him in an alley, where she reintroduced herself to the boy and took him out on a "date". She got him to follow her onto the train, where she explained to him Akane Shinjo's true nature, the state of the world, and the appearances of the Illusion Monsters that Yuta and friends had been seeing. When Yuta got off, she said that her predecessor owes Yuta a lot. Contact

Anosillus the 2nd saved Anti from the brink of death and the two Kaiju were watched over by Anosillus. Awakening (Finale)

Anosillus the Second and Anti, now known as Knight, entered the world after the Kaiju Eugenicists' Kaiju had weakened a certain barrier around it. What Is This Pain? After forcing Bullbind to escape, she and Knight approached the Dynazenon pilots with the latter offering their help, but they were turned down as they seemed suspicious. Knight got abrasive and left them, saying the injured will only get in his way. They later teamed up to fight and destroy Bullbind anyway, with the Second using her Fixer Beam charge to heal Dynazenon. They then left on a boat. What's Our Reason for Coming Together?

After Garnix's defeat, life seemed to go back to normal as the Kaiju Eugenicists ran out of Kaiju seeds. Chise once tried to go to school again but found herself unable to step into the premises. Knight and the 2nd inform her that they will be leaving with Goldburn soon, as Goldburn should not exist in a "normal" world. Knight then appeared when Sizumu attempted to attack Yomogi and Yume. Sizumu defeated Knight and unleashed Gagula to destroy the city. While Yomogi, Yume and the 2nd take care of Gauma, Knight fought Gagula as Kaiser Gridknight but lost. What Wish Can't Come True? Yomogi and the others then went to retrieve their parts of Dynazenon to pilot together for the last time. Even with their teamwork, they were still being overwhelmed by Gagula until Yomogi used Instance Domination on it to force it to move its mouth up and provide the others with an opening to attack. With everyone's efforts, they manage to defeat Gagula and the Kaiju Eugenicists. However, Dynazenon loses its color and Gauma seemingly dies.

Three months later, they visit the bridge where Gauma made his home before Knight and the 2nd leave with Dynarex and Goldburn. They arrive in another Computer World where Dynarex reawakens. What Was I Entrusted With? 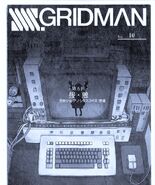