Ultraseven episode 16 "The Eye That Shines in the Darkness"

Annon (アンノン, Annon) is an alien that appeared in the TV series, Ultraseven. He appeared in episode 16.

Annon's name is said to derive from the words 'Anonymous' and 'Unknown'.

Annon came to Earth after the Earth defense forces sent a probe space ship to investigate his people's space. After bring the space probe back to Earth he ignited it, but was also blown apart from his body and was reduced to an eye while his body took the form of an odd shaped rock. A boy named Hiroshi obtained the rock and took it to his home. That night Annon spoke to Hiroshi that the rock he found is really his body and ordered him to drop that rock to a pit in a mountain. After his rock fell into a gaseous pit he grew into what he really was. The Ultra Guard unleashed everything they had on him, but nothing seemed to phase Annon until Ultraseven arrived on the scene. Annon tried his best, but the hero was too much for him to handle. Once Ultraseven used the Energy String Annon was paralyzed, the hero gave Annon a chance to leave Earth with his life. Annon accepted and Ultraseven escorted him off of the planet, his eye detached and flew away, leaving the rock body behind as it crumbled away.

Annon as an eye on a pile of rocks 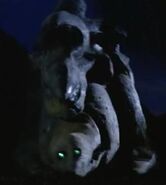