Yuriko Hishimi
Jane Woods (dub)
Anne Yuri (友里アンヌ Yuri Annu) was the youngest member of the UG and the only female member. She's been on the force for two years, and served the team primarily as a medic.

It is uncertain if the real Anne was in the episode or rather, a alien duplicate but "Anne" adopted Uriy in an alien orphanage. When Gen and Dan try to capture Uriy, Uriy rushes to "Anne" which Dan pauses too. When Dan tries to reunite with Anne, this "Anne" tells Dan that she is not Anne, which confuses him. At the end of the episode, Ultraman Leo takes "Anne" and Uri to space. Japan Masterpiece Folklore Series - Reunion of Fate! Dan and Anne

Anne Yuri retired from Ultra Guard to start a family with Dr. Kusuhara. There, she have a son named Dan, named after her former lover.

It appeared that Anne was appreciated in having her son sharing his hobby, such as that of astronomy. When he left for adventure and forest photographing, she was met by 2 newer members of the Ultra Guard, which was now led by her former comrade, Furuhashi. They offered her to pick her son up. The following day, she introduced them her home and it was revealed by Dr. Kusuhara that it was solar-operated. As her son was later kidnapped by a pair of disguised Alien Pitts, she became worried of what will happen to him. Later, after Ultraseven defeated Eleking, the Alien Pitt's ship arrived near him. Anne found out that her son was kidnapped and confined there and asked Seven to rescue him, to which he did. With Dan being rescued safely by Seven, the mother and son were finally reunited. When Furuhashi and his teammate, Kaji, arrived in the scene, Anne introduced him her son and they along with her relatives, his other teammates and the crowd, watched Seven leaving Earth for the second time. Ultraseven - Operation: Solar Energy

Anne is seen reuniting with Dan following his departure from the series' alternate universe. NEW WORLD

Anne in her nurse uniform

Anne interacting with Dan for the first time 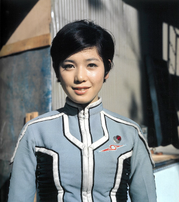 Anne fixing her hair with Alien Pegassa behind her 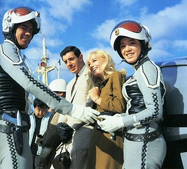 Anne, as she appears in the Heisei specials

Anne, with her son (Dan), in Heisei Ultraseven

Dan and Anne (right) in The Super 8 Ultra Brothers