Unknown
Angross (アングロス Angurosu) is a mole-like monster that appeared in the TV series, Ultraman Mebius. He appeared in episode 36.

Angross was a monster brought to earth by Alien Psychokino to assist them in causing mischief. Angross first surfaced to attack a nearby city until it was sent into retreat by the imposed GUYS, while Mirai discovered his Psychokino master.

Sometime later after Alien Psychokino was driven away by GUYS after a scuffle with a flustered Aide Toriyama, she unleashed Angross upon the surface for him to resume his rampage, revealing that she was in control of Angross's actions the whole time. Ultraman Mebius quickly arrived on the scene to battle the monster, but Alien Psychokino's psychic abilities overwhelmed Mebius and allowed Angross to gain the upperhand with ease, burying Mebius in a giant mound of dirt. With Mebius incapacitated, GUYS and Miclas was summoned to battle Angross and for a while, Miclas appeared to have the upperhand against the monster until its timer ran out. After Ultraman Mebius reach out to Alien Psychokino telepathically to remind her of the fun times she had with GUYS prior to Angross's rampage, Alien Psychokino, touch by the truth abandoned Angross and freed Mebius from her psychic grip, allowing the Ultra to destroy Angross with the Mebium Shoot. Mirai's Younger Sister

Angross is briefly seen battling against a Gromite who was in the area. The two monsters seemed evenly matched in strength. However, four black ships appeared in the area and ambushed the two monsters, killing Angross first with its blasts. The Pendragon Doesn't Rise to the Surface!

Angross was revived by Ultraman Belial as part of his 100 Monster Army. He was first seen as a spirit being awakened due to the Plasma Spark in a shot in the Monster Graveyard. He then teamed up with Lunaticks, Kelbim, Mukadender, Froguros, Alien Valky, Jasyuline, Gromite, Roberuga II, and Birdon to take on Ultraman Mebius. He was killed by Gomora's Super Oscillatory Wave during the final battle, along with Zoa Muruchi. Mega Monster Battle: Ultra Galaxy Legends The Movie 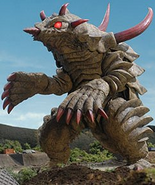 Angross, as seen in Ultraman Mebius 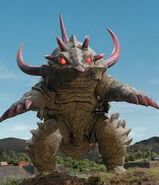 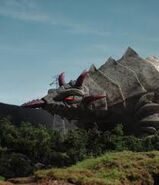 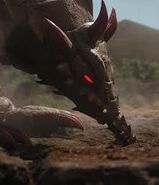 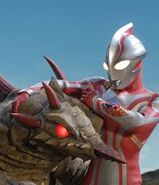 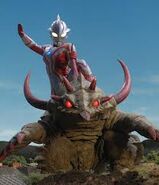 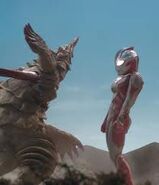 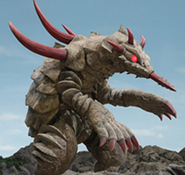 Angross can be seen in the upper left hand corner. 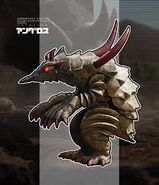