None
Angoras (アンゴーラス Angōrasu)[1] was a giant catfish-like Kaiju that first appeared in the TV series Ultraman 80 episode 34.

A deep-dwelling fish, Angoras came to the surface after its baby was caught and taken as a pet. Scaring the locals, the creature moved onward until UGM arrived. Their weapons had little effect against the fish, and soon Ultraman 80 was called on. The underwater monster was far larger than 80 and managed to overpower him, and the fact they were in its domain made it even worse. When 80 couldn't stop the creature, the baby Angoras was released. The parent quickly became peaceful when hearing its child's calls, and both parent and baby vanished beneath the water. 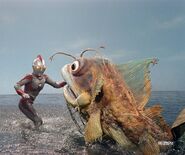