Anemos was a coelenterata life-form that lived in the Cambrian period that grew to large sizes for the course over 500 million years, along with the crustacean life-form, Crabgan, before Anemos died out, but its consciousnesses lasted through the eons as a ghost. Then in the present day, paleontologist, and former Alchemy Stars student, Miku Asano, who had studied Anemos, as well as Crabgan, felt sympathy toward the creature, believing that by going extinct, the Earth had abandoned Anemos. This caused Anemos to physically reappear in a state of sleep close to Onuma dam and was reported by the dam's maintenance personnel to XIG. But before XIG could take action, Miku contacted Aerial Base, urging XIG not to bother Anemos. Gamu Takayama instantly recognized his old classmate and rushed over to her home for more information on Anemos.

While Anemos slept, GUARD kept a tight watch on it, but unfortunately the KBC News crew was managed to capture Anemos on live video, bringing him to the public's attention, strengthening its soul and inter fully awakening it. Anemos released a pheromone into the water of the dam to attract Crabgan to its location. While XIG's Team Lightning deployed to deal with Anemos, but due to Miku's insistence, XIG held its fire. Then Crabgan arrived on the scene. After Crabgan and Anemos joined to become one powerful monster, Crabgan & Anemos. Team Lighting restarted their assault. Unfortunately for them, their weapons proved useless against this combined monster and it unleashed its pheromones into the forests, causing the GUARD members and the KBC crew to be drawn to the monster under toxic influence.

Upon seeing Crabgan & Anemos obvious intentions, Gamu tried to convince Miku that the Kaiju was nothing more than an enemy of humanity and that the pheromone had a double purpose of luring those in it to their doom, but Miku still tried to reach out to the Kaiju, saying that she would listen to it and sympathize with it only to be almost consumed by it. Gamu immediately transformed into Ultraman Gaia and rushed to Miku's rescue. The hero then began his battle the crustacean-like creature, quickly gaining the upper hand, but the rejected beast flipped over, with Anemos become the head and Crabgan the stomach piece, now being more aggressive the ancient being presented a terrible counterattack, only being stopped when the red hero soon unleashed his Quantum Stream, and separated the two monsters before obliterating them both with the the Photon Edge. 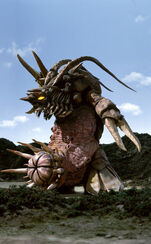