Mirror Fight episode 40
Androsaurus (アンドロザウルス Andorozaurusu) is a monster from Mirrorman. A second Androsaurus appeared later in the series, an offspring of the original.

Androsaurus was a monster who lives on Saturn. One day, the invaders stole her egg in an attempt to lure her to earth to cause destruction to the planet. Their spaceship was attacked by Androsaurus and the egg fell to earth as a meteorite. It was discovered and examined by the SGM. But the egg began to glow suddenly. It was a telepathy call from the Androsaurus's mother. It told the egg that the Androsaurus mother will arrive at the Earth. When it arrived, the guards attacked caused it to start a rampage. Kyotaro transformed into Mirrorman and fought Androsaurus. However, Mirrorman did not know the purpose of Androsaurus was to retrieve the meteorite (her egg). Once Androsaurus had her egg back, she proceeded to fly back to Saturn. However, the invaders arrived to attack her. Mirrorman used the Silver Cross to destroy the ship. Androsaurus then returned back to Saturn with her egg.

Androsaurus and its offspring attempted to fight Halley Jack, managing to stop its attack. The duo then flew into space and attempted to save Mirrorman, who was stuck inside a rocket heading into the sun.Using their horns the parent and child managed to break the glass, letting Mirrorman escape by letting him ride on top of it. The hero encountered the Jumbo Phoenix and thanks to its reflective surface was able to return to Earth where the Saturnian monsters soon went to. An Invader flying saucer attacked them, but Jumbo Phoenix managed to ward it off and shot it down. Halley Jack returned to harass them both, but the Jumbo Phoenix quickly shot their attacker and blew him to pieces. However, upon finding Mirrorman, the monster collapsed and on the verge of death. The parent monster started to cry as the hero begged it to fly again. Just as Mirrorman turned away to finish off Mayasaurus β, Androsaurus passed away as the sun set.

Androsaurus Junior hatched in weeks following its parent retrieved the egg from Earth. With its parent the two Saturnian monsters were being chased by the giant alien Halley Jack. During the chase they tried to save Mirrorman who was trapped in a rocket heading towards the sun. Both parent and child eventually broke the glass that allowed the hero to escape. Both of them soon headed toward Earth, the Jumbo Phoenix aiding them against and Invader flying saucer and Halley Jack. Androsaurus and Androsaurus Junior found Mirrorman, but the former was on the verge of death, quickly collapsing. Before long the parent monster had died, leaving Androsaurus Junior orphaned. While in mourning, Androsaurus Junior returned to Saturn at Mirrorman's request wit Fujimoto and Yasuda escorting it with the Jumbo Phoenix.

Androsaurus appeared in episodes 39 and 40 of Mirror Fight. Stock footage of his fights in Mirrorman were reused in this series.

An Androsaurus is present during the events of the comic, appearing on the planet ruled by the Cicada People, forced to fight for its survival and for the insectoids entertainment. 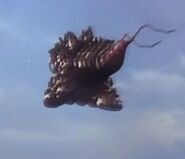 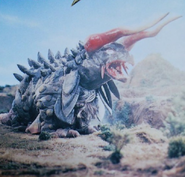