Ultraman Wiki
Register
Don't have an account?
Sign In
Advertisement
in: Ultras, Heroes, Other Heroes,
and 9 more

TBA
Andro Melos (アンドロメロス Andoro Merosu) is one of the four original Andro Super Warriors who appeared in the manga of the same name as well as the miniseries, Andro Melos. This name is the alias of those who wear the Cosmo Tector. Benoit (ブノワ Bunowa) is the current user, with the role previously being held by his deceased father Cesar (セサル Sesaru), followed by Zoffy.

While patrolling in space, a soldier of the Andro People named Cesar saw Zoffy being thrown into a black hole by Ace Killer and rescued him by giving Zoffy his Cosmo Tector, dying in the black hole in his place. Zoffy took on the alias of Andro Melos and saved the galaxy from countless catastrophes. He is later joined by Andro Mars in his battle against the monsters. After Ultraseven is seemingly killed and Andro Wolf appears to Andro Melos, Mars begins to think that Wolf is Ultraseven. They are proven wrong when they find Ultraseven being held by the evil Juda (the main antagonist of the show). After destroying Juda, it is revealed that he was a robot, Zoffy reveals who he really is and how he survived the black hole. Zoffy hands down his Cosmo Tector to Ceaser's son, Benoit, and returns to the Land of Light with Seven, leaving the position of Andro Melos to Benoit.

At the start of the miniseries, Zoffy (who is unnamed by the narrator) gave Melos the Ultra Cross chest medal in recognition of his bravery. During the series, Melos and the Andro Defense Force fought against the tyranny of the Gua Army and their minions.

Some time later, Queen Izana, the War Deity at the time, invited Melos to the Galaxy Rescue Force. Before leaving his position as the leader of the Andro Defense Force, he trained Andro Ares to be the next leader, despite acknowledging that he is still young and a bit overconfident. Andro Melos

Following Ultraman Ribut's successful rescue mission of saving Max, Ultraman Taro dispatched him to the Galaxy Rescue Force, with his friend Sora also being sent too. Together with his fellow members Queen Izana and Gukulushisa, Melos welcomed the two new recruits. The Beginning

Ultraman Ribut and Andro Melos arrive on Planet Maijii to help the Tri-Squad fight against Zett and his army of Zettons. Together, they managed to defeat the Zetton Army while Taiga went to face Zett, forcing him to retreat after firing the Aurum Strium at him. Receiving a message from Taro, they all went to the Land of Light to regroup, where Ribut briefed the three of them on the situation with Absolute Tartarus.

Soon after defeating Ultimate Shining Zero in Narak, Absolute Tartarus appeared, taking Yullian hostage and informing the heroes of his true motives before getting Ultraman Belial and Ultraman Tregear to fire their beams at them all. The group also received word from Ultraman Hikari that Genegarg had stolen a Z Riser and Ultra Medals from the Land of Light, causing Z to fly off in a hurry while Zero followed him. The Ultra League and the Tri-Squad prepare to recruit more heroes for the upcoming fight against The Kingdom. The Appearance

After returning to the Land of Light from Planet Ebil, Melos was put in the lead of the rescue mission to save Yullian after Father of Ultra requested the assistance of the Galaxy Rescue Force for the fight against The Kingdom.

The Grantector (グランテクター Gurantekuta) was developed long ago by a group of andro scientists. It was the ultimate legendary weapon hidden in the Earth's North Pole. It is the strongest space Cosmo Tector, making the wearer tens times stronger. Melos first equipped it in episode 40. It was destroyed along with Gua in the final episode.

Andro Melos teamed up with Knight Hunter Tsurugi and other Ultras to fight Grand King and a robot army lead by Alien Keel in a stage show. 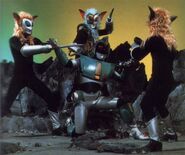 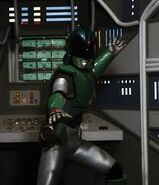 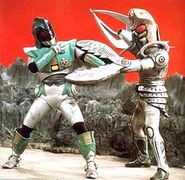 Zoffy in the Cosmo Tector 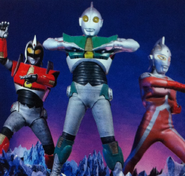 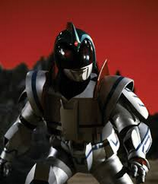