While exploring the Amoeza Nebula, the Space 7 was contaminated with space amoebas. They killed the crewmembers on the return trip, right above Earth, and began to reproduce. When the Space Mammy went to investigate, Takeshi climbed on board to pilot the vessel away from Earth. The slimy creatures climbed through doors and hatches to attempt to get at him, however, he managed to fight them off.

When the Space 7 crash landed on an asteroid, the amoebas came together as one after absorbing all the energy from the dead crew. Takeshi also transformed, and the two battled. After some fighting, 80 destroyed the monster with his Succium Beam. 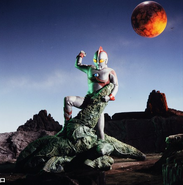