The☆Ultraman episode 20 "This is the Ultra Star! Part 2"

The☆Ultraman episode 50 "To The Ultra Star! Conclusion: Towards Peace and Victory"

Amia (アミア, Amia) is the younger sister of Ultraman Joneus. She's an Ultra-being like her older brother. Her only power is her Amiassher energy beam (which is relatively weak). Despite having her transformed form shown, she does not bear a proper Star Symbol and can not become giant size. Even her social and time restraints as a simple worker, she sometimes goes down to Earth against regulations.

Amia was the younger sister of the Ultra-being known as Joneus, when her brother fell on Earth his human host was brought to U40 to revive both of them. There she acted as his friend as she helped the young man recover his memories and explained the nature and origins of the conflict between Ultras and monsters. Sometimes after the battle between the people of U40 and the Hellar fleet, Amia snuck aboard Hellar's capital ship to attempt a rescue of the Great Sage of U40. Unfortunately she was captured and watched with the Scientific Defense Guard as he was digitized and stored on a card. When Choichiro transformed into her brother, rescuing everyone, Amia took it upon herself to revive the Sage and teleport away with him.

Amia transforms like her brother and the rest of her species, using the Beam Flasher. She places it on her forehead after charging it in the air to transform. For a time she took on a human host named Kyoko Kodaka (小高 京子 Kodaka Kyōko) during a short stay on Earth. She transformed in the same manner as Amia herself.

Amia showing her true form to Hikari during his time with the U40 tribe.

Amia inside an Enemy Base

Forced to turn back

Amia saying goodbye to her brother through Hikari

Amia and Hikari flying a plane

Amia having teleported into Hikari's fighter 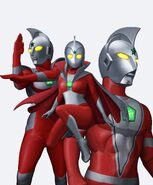