None
Alulu (アルル Aruru) is the second Allosaurus sent to fight against humanity in the series, Dinosaur Great War Izenborg.

After the death of eight of his dinosaur underlings, Ururu put his next plan into action. He ordered three of his most craftiest reptiles to invade Tokyo and build a nest, and in it, they would put dozens of eggs.

Alulu ran from his mountain hiding spot to join Mororo and Sutego in the center of Tokyo. As Mororo spat web to secure an area for the eggs to hatch in, Sutego rapidly dug out a nest with his massive feet as Alulu reached into the soil to pull out the orbs of life.

Aizenborg soon appeared on the scene, flying in and destroying the eggs, and then, fighting the three saurians, and after an attack resembling a dinosaur-tornado, the Aizenborg plowed through all three of the dinosaurs, in a row, killing them all in a flesh filled explosion. 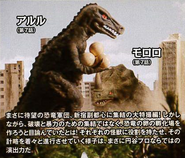