One day, Alukela arise from Earth and wandered off. As Team EYES about to take an action, they realise that the monster is actually dying as her energy getting weakened. JADF leaves this to Team EYES as they slowly watch Alukela dying until night. Although the monster's lifespan ended but somehow, it reignites and approaching the city. Musashi transforms into Cosmos and tries to stop the monster. As it fights the Ultra, suddenly, it weakenes slowly again and truly dies, giving birth to Snow Stars as they peacefully witnessed this.

Explosive Light Bullet
Snow Stars
Small gregarious organisms in space, Snow Stars (スノースター Sunōsutā) were designated as a protected beneficial organisms to the defense forces since they can eat radioactive wastes. In according to some myths by certain astronauts, anyone whom wishes at them will have their wish come true. 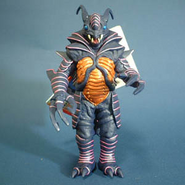 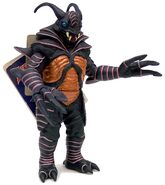