Return of Ultraman episode 46 "This One Blow Filled with Anger"

None
Alien Zoole (ズール星人 Zūru Seijin) was an alien that appeared in the TV series, Return of Ultraman.

Alien Zoole came to Earth and told a story to a few little kids, about the future fight MAT would have with Red Killer. A kid followed Zoole, who then pushed the kid off the bridge, making it look like MAT was responsible. Alien Zoole then reported to his superiors that phase 1 was completed.

Go was suspended from MAT after people thought that he was responsible for the injured child. Go then went to the hospital to visit the injured boy. It was at this time Alien Zoole called forth his kaiju, Red Killer, which started to rampage. MAT eventually defeated Red Killer, but Alien Zoole revived him, stating that it was going to take more than that to kill the beast. Go was still in self pity was reluctant to fight. It was then that the child awoke and revealed that it was the artist that threw him of the bridge. Go then went into action. Later with the other crew of MAT, they confronted the artist, eventually shooting the artist. Upon death Alien Zoole's corpse transformed into its true form. This One Blow Filled with Anger 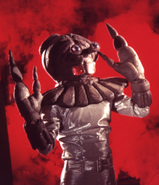