"This is Ultraman Max's last battle. The Zetton Shutter will be impenetrable."

The Zettonian Aliens were one of many races who, at one time or another, would seek Earth as their own. However, unlike many of the others before them, they were far better prepared for their invasion, having obtained one of the most powerful monsters to ever fight an Ultra, Zetton. The Zettonians headed towards Earth, their ships massive in number, prepared for a full scale invasion. Having become well aware of the Science Patrol’s role in stopping previous invasions by Alien Baltans, Alien Zarab, Dada, Alien Mefilas, a higher ranking Zettonian disguised himself as a human, his intent being to infiltrate the Science Patrol. A several space probes were launched to intercept the incoming ships and figure out what they were, only to be obliterated by the Zettonian’s powerful weapons. This would tip the Science Patrol to the incoming aliens and a fleet of jets were deployed and entered a dogfight with the invasion fleet as they entered the atmosphere. While many ships were destroyed on both sides, the Alien Zetton gained the upper hand and obliterated their attackers. Not having lost even a fraction of their force, the Zettonian continued their advance. With the invasion still coming, the Science Patrol stepped up to fight back. However, the Alien Zetton agent sent to Earth was quick to knock out and replace an official visiting the Science Patrol base. As the Zettonian were confronted by two Science Patrol fighters, they found themselves totally outmatched in terms of fighting skill by the group of humans specifically trained to battle aliens and monsters, the two ships destroying fighter after fighter. But their agent back in the Science Patrol HQ knocked out the member who stayed behind and began destroying their technology. In the midst of the battle between the Science Patrol and the Zettonian armada, the mother ship escaped into a canyon and disappeared while most of their remaining fighters were shot down. Returning home, the Science Patrol discovered their commander center badly damaged and began chasing after the Zettonian Seijin spy. The alien was finally tackled to the ground by Hayata and revealed himself as the vile alien he was. Before he could do anything, he was shot and killed, repeatedly saying "Zetton", the order to unleash the monster. On call, the Alien Zetton mother ship emerged from below ground and landed. The craft opened up, producing a large blue sphere that detonated, releasing the alien's ultimate weapon named after their home world, Zetton.

In the year 8,000 BC, a Zettonian inserted Nano DNA into humans from their creation, Zetton. Ten thousand years later the nano DNA fully matured in a young girl named Natty that visited DASH and told them DASH would be destroyed and Zetton would kill Ultraman Max. That night, the Zettonian visited Natty and awoke the nano DNA within her body, allowing him to possess her. Natty infiltrated DASH, found the coordinates to defense satellites, and destroyed them with an alien sword. Not long after she literally jumped away Zetton crashed to Earth in a blue fire ball. Zetton was destroyed by the combined power of Max and Ultraman Xenon, but he was only one of five monsters the Zettonian would use to conquer Earth. Later it turns out the last four fighters are actually four ships. The four ships came to Earth and left the message "King Joe". That night the Zettonian possessed Natty again and used her to pilot King Joe that morning. Once King Joe was destroyed, the Zettonian teleported Natty and Kaito to the Zetton Zone where she killed her former master, ending the reign he had over her for good.

An Alien Zetton and an Alien Hook face off against each other using the two monsters, Dorako and Telesdon. Their battle is interrupted however, when Alien Pedan sends King Joe Black to destroy both the aliens and the monsters.

Another Alien Zetton arrived on the Pendragon spaceship as it was being attacked by Nurse in dragon form. Both were apparently sent by Belial to destroy the ZAP SPACY crew in response to Rei's presence with the Ultras in the Monster Graveyard. Zetton revealed this information before he could fire a single shot. However, Shin Asuka, the human host of Ultraman Dyna, appeared and interrupted him. The two a short hand-to-hand fight after which he was killed him when Asuka kicked him into some of the ship's machinery. Zetton turned to dust and Nurse continued its attack in a more viscous fashion, causing Asuka to transform into Ultraman Dyna to defeat the space dragon.

An Alien Zetton with a similar appearance to Berume appears in this series.

One of the members of intergalactic crime network Dark Star Cluster (暗黒星団 Ankoku Seidan), Alien Zetton was first seen with his comrades performing robbery in a warehouse. When Halky's Samekujira Jolly came to Earth for its master, the team approaches Xio and Jolly's owner, demanding it until Halky challenged them for a rugby match.

Three days later in the tournament, the Dark Star Cluster participated in the rugby and scores 51 points in the first half due to cheating with their powers until Isamu's fighting spirit turns the tables in the second round. Enraged when Isanmu called them no side after the game ended, they enlarged and began on a rampaging spree before Ultraman X Gomora Armor sent them to the sky with Gomora Oscillatory Wave.

"*laugh* You people still think this half-rotten planet is worth invading? What a joke! One day... you'll flee this planet and abandon it."

Wanting to earn a reputation throughout the universe, Alien Zetton Maddock decided to keep his monster Hyper Zetton Deathscythe hidden in an abandoned factory, disguised himself as a young girl named Matoko and lured in the captain of the SSP, Naomi Yumeno to that factory on saying that "she" was on a lead of an alien and it's monster hiding in there. When the two of them got there, Maddock decided to reveal his true form and chained up the woman while telling her to keep screaming and struggling saying that "he" will show up and save her. That he was later revealed to be Gai Kurenai, aka Ultraman Orb, whom Maddock knows all about, even the fact that he always save a certain woman he likes. He and Zetton tried to kill the wanderer with their weapons (the energy rifle for the former and the fireballs and scythes for the latter).

Maddock was then dealt a certain deal of damage after Naomi sprayed a fire extinguisher at him and when his monster broke out, he left the factory to pursue the duo and he boasted to Ultraman Orb that he studied the Ultraman's moves, claiming it impossible for him to defeat Zetton, but was proven wrong after Orb destroyed Hyper Zetton Death Scythe in his Hurricane Slash form. He then takes on Gai in fisticuffs that leads the two of them to the top of a another building and the fight ends when Gai's Ultra Fusion Card of Ultraman blocks and reflects an attack from Maddock's energy rifle. While downed, he told Gai about his true intentions and the SSP that Earth isn't worth invading and that one day, they will leave and abandon the planet. After that, Maddock finally died and his body reduced to nothing more than foam.

"Stop it! enough! If you destroy it, you'll share the damage! Your memories of them will be lost, too!"

In episode 21, Maddock returned in an artificial life form serving as his new body. She was his 'Spare' and took the appearance of a young girl named Maya. He chose this form with the idea that it would be one Gai would be unable to harm. While he did manage to summon another Hyper Zetton Deathscythe numerous times for a whole month his plan was faltered by an elderly couple, the Iwaki couple, who had taken the girl in and filled her head with emotions, information and memories, causing Maya to develop a personality of her own, making it difficult for him to control the monster completely. After being found out by Gai, Ittetsu, and the SSP, Maddock let them and the Iwakis in on his scheme and commanded Zetton to ravage the city however, after he was held back by Maya's own consciousness for a short time, he teleported away.

When Ultraman Orb appeared again, Maddock commanded the monster to attack and he tried to attack Maya's family, however, as she was fighting Maddock's consciousness, she was reminded by the Iwakis about the happy times they had together and despite Maddock's warnings, Maya managed to destroy the bracelet controlling Zetton, freeing her from Maddock's presence for good. 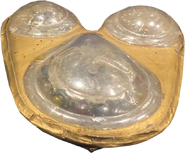 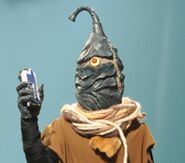 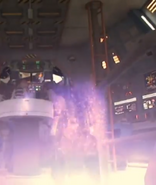 In the ULTRAMAN manga it's revealed that the Zettonian race has all but been destroyed during their prior attempt to invade the planet by Ultraman. The last known Zettonian is apparently an individual named Edo, who now works with the SSSP.

Alien Zetton (known as "Alien Z-ton") reappeared in the puzzle role-playing game for mobile devices, Ultraman Galaxy as a UR (Ultra Rare) card that you can unlock him in a event called The Alien Alliances with a rare chance of getting Alien Zetton. 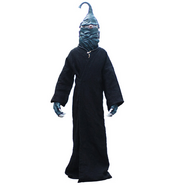 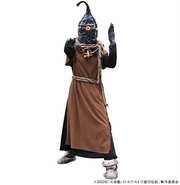 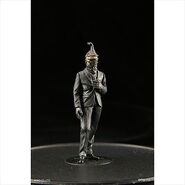