Return of Ultraman episode 31 "In Between a Devil & Angel"

Alien Zelan (ゼラン星人 Zeran Seijin) is an alien that first appeared in episode 31 of Return of Ultraman.

Two young children visited the MAT base, but while the girl was very talkative, the boy merely glared at Hideki Go, the human host of Ultraman Jack, making him uneasy. He then telepathically talked to him, revealing his knowledge of him being Jack’s hosts and revealing himself as Alien Zelan and giving his threats of world domination, prodding him to turn into Jack to fight the kaiju. Go tried to stop the alien to protect the girl, but everyone believed he was a harmless child and restrained Go, letting him escape. No one believed his stories and soon, Alien Zelan released Plooma.

As Go and company attacked Plooma, Alien Zelan further prodded Go to become Jack but Go refused. Alien Zelan further tied MAT's hands by allowing Plooma to hold him in his human form, pretending to endanger him to prevent them from attacking the monster. Plooma soon finished his rampage, letting Alien Zelan float into the sky on a balloon where MAT 'rescued' him. In the hospital, Alien Zelan once again prodded Go into attacking what everyone else saw as a harmless child, further tarnishing his reputation and getting the girl to trust him. But later that night, Alien Zelan used his remote to try to summon Plooma, only for a nurse to come in at that moment. Realizing she saw too much, Alien Zelan vaporized her with his eye beams, then laid back down as Plooma attacked. After Plooma was decapitated by the Ultra Bracelet, Jack tried to return it to his hand, only for Alien Zelan to take control of it and attack him with his own weapon!

Jack was forced to evade the attacks from the Ultra Bracelet, even when Alien Zelan split it into hundreds of them. Alien Zelan soon managed to knock Jack to the ground with the barrage, then convert the Bracelet into a constricting weapon. The whole time, Alien Zelan had wanted Jack to appear so he could destroy him with his own weapon. Jack’s timer began to blink rapidly as the weapon tried to constrict his body to pieces. However, the MAT commander soon arrived, finding the alien, who tried to use his eye beams, only to be dodged and the commander to shoot his remote from his grasp, then shoot him in the throat. The mortally wounded alien staggered forwards and finally died, reverting back into his true form, allowing Jack to regain control of the Ultra Bracelet, making the alien’s plot all for naught.

He was seen commanding the monster Arstron against the Space Beast Galberos and his master Alien Nackle. Try as he did, Arstron could barely hold his own against Galberos and soon exploded by the three-headed monster's fireballs, killing him and with Alien Zelan in the explosion.

Alien Zelan was chased by Ittetsu Shibukawa after investigating a crime scene involving paint and a chalk outline and presumably killed off-screen by a shot from the VTL captain's rifle.

Prior to the series, an infiltrating Alien Zelan appeared in Moa's flashback, where he was seen taken care of by her. Child of Battle

In the present day, another Zelan (unknown if he is the same individual from the past or not) worked as an AIB undercover field agent. When tasked with observing Kei Fukuide, Kei caught onto their plan and destroyed the device keeping the alien disguised. The forceful removal of the disguise caused it great pain and compromised the mission. The Geed Identity

An Alien Zelan named Oshoro (オショロ, Oshoro) planted Gymaira on Earth so that it would absorb the planet's magic power, but it got hungry and started to eat people's life energy as well, causing them to not be able to have dreams. Oshoro also factors this in, as people would become mindless drones that can be easily conquered. Oshoro finds Maria, a witch, and wants to use her to control Gymaira as the instruction manual he had stated that only a magic user can control Gymaira. He captures Maria in his spaceship and uses his device to call upon Gymaira from the underground, but it accidentally summons Pagos instead. Getting into a brief fight with Homare Soya, he is hurt and teleports away, but not before saying that he would not give up. One Afternoon When the Magic Was Lost From the Star

Frustrated at his plan being foiled, Oshoro took Gymaira into hiding. However, Kirisaki approached him and transformed into Ultraman Tregear, and then knocked him out. The next time he appears, he attacks Maria, but she manages to deal with him. After Gymaira's defeat, Oshoro flies away in his spaceship. Even Then the Universe Will Still Go on Dreaming

After hearing from Foreign Affairs X that Hiroyuki was being targeted by remnants of the Villain Guild, Kana Sasaki set out to find them in order to protect her employee. She came across them at their hideout and asked them nicely for information, but things took a violent turn as a fight broke out. Fortunately, Kana was joined by Gai Kurenai, who helped her fight off Alien Zelan, Alien Bado and Alien Ckalutch. They interrogated them after their defeat, and found out that they wanted to steal the Ultramen's Bracelets to sell them off and escape the Earth when Grimdo arrived. Ultraman Taiga The Movie: New Generation Climax 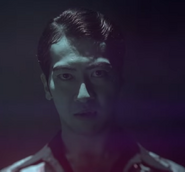 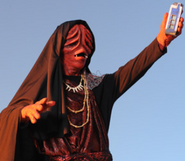 The Alien Zelan of AIB