"All the planets I have visited... Destroyed themselves fighting each other."
"How terrible!"
"I was born for this purpose, it is what I do."

―Alien Zarab and Shin Hayata, "Brother from Another Planet"

Ultraman episode 18 "Brother from Another Planet"

Alien Zarab (ザラブ星人 Zarabu Seijin) are aliens skilled in illusion from the planet Zarab. They have been mostly portrayed as vile beings with the desire to destroy other worlds, either through trickery and deception, or brute force. They are best remembered for being the the first aliens to imitate an Ultra-being.

The first Zarab's goal was to destroy the Earth by causing chaos between the world's government and have them destroy themselves.

Alien Zarab I was spotted by the SSSP within a toxic fog that fell over Tokyo. The alien claimed to be the friend of humanity and offered to remove the fog as proof of his good intentions. However, at the time of Alien Zarab's good deed, SSSP member Shin Hayata was investigating a missing space shuttle that suddenly appeared back in the Earth's stratosphere. When Alien Zarab removed the toxic fog from Tokyo, it was sent into space, along with the space shuttle. While Alien Zarab I had gained Earth's favor, the SSSP had Hayata keep a close eye on him.

When Alien Zarab I took his leave from Earth to return to his ship, Hayata followed him. Hayata discovered that the Zarab man's ship was actually the missing space shuttle and he had enslaved its crew. Before Hayata could return to Earth, Alien Zarab I revealed that he had been aware of Hayata's presence since they left Earth, the alien also knew that Hayata was the human host of Ultraman. After revealing his true intentions the man of Zarab imprisoned Hayata, then returned to Earth disguised as Imitation Ultraman (にせウルトラマン Nise Urutoraman) and briefly began to destroy the city of Tokyo, planning to use Ultraman as the means to cause the humans to fight among themselves.

Alien Zarab I then appeared at a council meeting and insisted that the SSSP should attack Ultraman if he returns. This caused much argument among the council members as they still had faith in Ultraman. Later that night, Alien Zarab I disguised himself again as the Imitation Ultraman and returned to his rampage. However honorary SSSP member Hoshino found where Alien Zarab had hidden Hayata and freed him, allowing him to become Ultraman and clear the Ultra Warrior's reputation. Ultraman managed to shed the Alien Zarab of his disguise when the impostor tried to escape. The Alien Zarab fought hard against Ultraman but was eventually killed, thus, ending his invasion.Brother from Another Planet

A few months later, Alien Zarab was "resurrected" along with Kemur Man Ⅱ and Baltan Ⅲ as Alien Zarab Ⅱ (ザラブ星人二代目 Zarabu Seijin Nidaime) by Alien Mefilas. Mefilas did not want to use violence so he made the aliens disappear. They were only a presentation of his power.

Alien Zarab has formed Alien Union with fellow aliens: Alien Temperor, Alien Guts, and Alien Nackle in order to kill Ultraman Mebius and release U-Killersaurus and Yapool from the seaside of Kobe. After Temperor was destroyed by Mebius, Zarab was sent to take care of "Phase 2" of the plan. After kidnapping Aya Jinguji (Mirai/Ultraman Mebius's human disguise's close friend) as well as both poisoning and paralyzing Mirai, Zarab transformed into Imitation Ultraman Mebius (にせウルトラマンメビウス Nise Urutoraman Mebiusu) and attacked the city of Kobe. Luckily, Mirai transforms into Ultraman Mebius again, Mebius initially had trouble against his dark duplicate, but was eventually able to break his disguise with punches and a Mebium Slash exposing the Zarab's true identity, however, Mebius started using his anger, recklessly firing energy shots and weakening as Zarab started to regain the upper hand, Mebius struggled to regain his control and composure, wasting quite a few Mebium Slashes by repeatedly shooting them while Zarab had a shield up. However, as Zarab was about to finish Mebius off, Mebius heard the advice of his mentors and countered with the Mebium Shoot, destroying Zarab and regaining the trust of the people. Unfortunately however, Zarab managed to complete Phase 2 before dying and left Mebius weak enough for Guts and Nackle to attack Mebius.Ultraman Mebius & the Ultra Brothers

This alien reappeared in the series Ultra Galaxy Mega Monster Battle: Never Ending Odyssey. In this series, Alien Zarab is portrayed as a moronic, and comedic character who steals useless Battle Nizers for unexplained reasons. He does however manage to kidnap Haruna (the female member of the ZAP SPACY crew) and disguises himself as her to masquerade as her to the rest of the ZAP SPACY crew members, but fails miserably and comically when he cannot cope with the simple life of humanity, mistaking insignificant terms for danger. However the real Haruna returns and Zarab is exposed as the fake. However before the ZAP SPACY can take action, Alien Zarab transforms into Imitation Ultraman and becomes more of a threat to the ZAP SPACY crew. However, after a short and comedic battle against Rei's Gomora and a vengeful Haruna, Alien Zarab's true form is revealed. Hurting and humiliated, Alien Zarab flees from Planet Hammer never to bother anyone ever again.

Although not seen in full body, Alien Zarab's hand is shown grabbing the Giga Battle Nizer in the end of the gaiden, foreshadowing when he gives it to Belial in Mega Monster Battle: Ultra Galaxy Legends The Movie.

In the film, Alien Zarab (as Imitation Ultraman) attacks two guard Ultras and frees Ultraman Belial from his prison. After revealing his true identity, Alien Zarab gives Belial the Giga Battle Nizer in hopes of the two forming an alliance. Instead, Belial betrays and kills Zarab, not wanting to share his rule with the alien.

In episode 7, Alien Zarab along with lots of different monsters are seen cheering Ginga on as he fights Dark Galberos.

"I am Alien Zarab. I have destroyed countless planets and your Earth is next."

―Alien Zarab as he broadcasting himself.

Alien Zarab is an intergalactic criminal that had destroyed countless planets. He sets Earth as his target by bombing multiple chemical plants. After bringing Bemstar's Spark Doll back to life, he hid himself in another chemical plant again, being tracked by Xio officers Wataru and Hayato but their inability to cooperate gives Alien Zarab a chance to escape.

Soon, he reappears at point S-9, trying to bomb another chemical plant until the Xio members, Hayato, Wataru and Asuna confront him. He grew into giant proportions to crush them but destroyed after being overpowered by Land and Sky Musketty, followed by Wataru's Ultlaser. All for One

It is evidently that either Alien Zarab's Spark Doll or his specs was collected, creating a Cyber Kaiju under the name Cyber Zarab (サイバーザラブ Saibā Zarabu), held inside the Cyber Cards. Here, Cyber Zarab was used as one of Xio's target practice alongside Cyber Neronga. Feature Report! 24 Hours Inside Xio

A cameraman for NPTV's documentary program, his partner Alien Mefilas's section was failing and views were dwindling. Their boss, an Alien Chibull, warned them that if things don't change, they will have to face some consequences. Mefilas then got the idea to have his partner Zarab to disguise as a giant Saki Mitsurugi, but their director reprimanded them. They then went around interviewing other people and aliens regarding their thoughts on Saki's plan to turn Earth into a bomb, but yet again the director said that if they don't get the views, the sponsors would pull out and the program would be cancelled. Desperate for a solution, they decide to interview Ushio Minato, who they saw potential in after seeing him on the news. The two then took on human disguises and went to Quattro M to interview the him, and disguised as a man named Yamada (山田, Yamada) to do so. After the interview was over, they went over to Aizen Tech to interview Saki Mitsurugi regarding her plan, asking if she could hurry it up, even though they didn't have much hope that the interview would go well. However, the duo were chased out. They then went back to interviewing other people, this time about Ushio. Coming to the conclusion that an Ultraman's father would have extraordinary abilities, Mefilas decided to set Ushio up. He had Zarab disguise as Asahi Minato and restrained near a bomb and lots of explosives, in a life-or-death game that he thought would really get him the views he needed and was even willing to sacrifice the Zarab, who was unaware that the explosives were real. Katsumi Minato and Isami Minato found out about the plot, and transformed into Ultraman Rosso and Ultraman Blu and after the battle, Mefilas was destroyed by the Triple Origium Ray and Zarab was set free by Ushio.A World Without Tomorrow 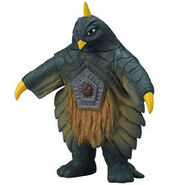 Wave Intrusion
Add a photo to this gallery
Cyber Zarab

Alien Zarab became popular among fans due to him being the first alien to have a form which imitated that of the Original Ultraman in the form of Imitation Ultraman (にせウルトラマン Nise Urutoraman), which has been the Ultra Warrior form that the Alien Zarab have imitated the most. However, several contrasts can be identified to differ the imitation from the real one. Among them are: 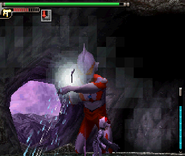 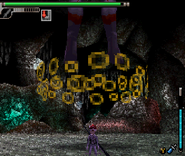 Catch-Rings
Add a photo to this gallery
Imitation Ultraman Mebius 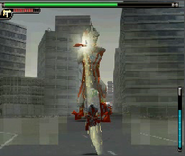 Mebium Shoot
Add a photo to this gallery
Alien Baltan

This form, along with Zetton was only used in Ultraman Boy's Ultra Coliseum. Alien Zarab could switch between them whenever he wanted.

This form, along with Alien Baltan was only used in Ultraman Boy's Ultra Coliseum. Alien Zarab could switch between them whenever he wanted.

Alien Zarab appears in episode 110 of Ultraman Boy's Ultra Coliseum. In the episode, Zarab fought Ultraman Agul with a series of shockwaves and later on summoning a hypnotized version of his past self (Version 1) to fight the present day Agul. The past self vanished in thin air as Zarab left the battle unharmed.

MSM-07 Z'Gok mobile suit had its design based on Alien Zarab. Of course, Tsuburaya would return the favor with two characters themed after two mobile suits: Apatee, based on MS-06 Zaku II and Gan Q, based on MSM-04 Acguy.

The Keroro Platoon possessed robotic copies of themselves called Copy Robots which Kululu made to replace them whenever they took a day off, as well as taking care of the household chores at the Hinata residence. The Keroro Platoon's robotic imitators could not only imitate Keronians (their race) but also other humans.

While imitating a Keronian, the duplicates disguise had a little defect, much like Alien Zarab as imitation Ultramen, they had sharp eyes and witch-like feet. Humans could not see the differince between the robotic Keronians and the real ones, something which in the original Ultraman series portrayed.

Despite being used as replacements, but in one episode, Keroro and his platoon tried to use mass-produced version of these as invasion armies. However the plan backfired and ended up with the impostors replacing the Keroro Platoons (including Mois) and the Hinata siblings. It wasn't until the real Tamama (whom was in vacation before the impostors' takeover) destroyed them and free their captives. Kululu rebuild the Keroro Platoon Double but never intended to use them for malicious schemes again.

Retrieved from "https://ultra.fandom.com/wiki/Alien_Zarab?oldid=470717"
Community content is available under CC-BY-SA unless otherwise noted.