Ultraman Wiki
Register
Don't have an account?
Sign In
Advertisement
in: Separate Character Articles, Articles without an official name, Antagonists,
and 7 more

"What irony, Zamu Revenger is guided by the testimony of Earthling friendship. I have done with my revenge"

N/a
The second Alien Zamu (ザム星人 Zamu Seijin) is a revenge-driven alien who inherited the leadership of her race from the former leader. Despite the former's death by his own volition, she refused to believe this and believed that resistance against the Dark Matter as a futile attempt, wanting to spend her final hours satisfying her own vengeance. When doing so, she took the human guise of doctor Natsumi Otomo (オオトモ・ナツミ Ōtomo Natsumi).

After their defeat the second in command of the Zamu species was obsessed with vengeance and tried to destroy the Earth by of infiltrating HEART and destroying them. While HEART was escorting an important scientist on Dark Matter, when a mysterious saucer followed them and began to attack. However, the two HEART Winners showed up just in time and chased the saucer away. After the scientist turned out to be Alien Zamu in disguise and took the Estreiler to prevent Genki from turning into Ultraman Neos, it summoned their weapon Zamu Revenger, the saucer spotted earlier. It revealed itself and turned into it's true form, a giant robot. Ultraseven 21 came to the scene, scolding the Zamu and explaining that Neos only followed the direction of their Leader, but the Zamu native was to obsessed with revenge to listen to reason. Seven 21 fought Zamu as the Estreilar flew from her possession to be used once again by Genki. Seven 21 managed to restrain Zamu only for her to break free and reveal that a command bracelet given to a the scientist's friend, the UN liaison to HEART, was the only way to stop Zamu Revenger. With that she killed her self via self vaporization. Neos worked to slow down the Zamu machine, but was getting trounced, and saved only when Seven 21 destroyed the control bracelet allowing him to destroy the machine. 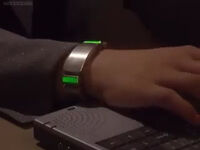