"We Alien Zamu have personal names, which mankind has on this planet. We call each others by personal roles. They call me Esura. In your language, it means "expectation"."

The Zamus are designed after Alien Baltan and Zetton. Since Neos incorporated elements from Ultraman and Ultraseven.

In this miniseries, the Zamus are portrayed as a race of aliens who were forced on an exile from their own planet from the plagues of Dark Matter, led by Mensch Heit and the monster Grall. They escaped to Earth for refuge and decided to research upon the same substance as a counteract to reclaim their planet. The Zamu leader offered himself to be the test subject and thus they erected a special tower to siphon the Dark Matter energies into him. The project however met with failure as their leader turned into berserk until Ultraman Neos interfered and killed the alien per his own orders as a safety measure.

Sometime later, the new leader sought vengeance upon the former's own demise (despite others made it clear that his death was by his own volition) and tried to sabotage a conference regarding the Dark Matter investigations. Her plans eventually foiled by the combined effort of Neos and Seven 21, the latter slipped into the human society as well to save the victim that Zamu had replaced.

With Grall approaching Earth, the remaining Zamu was forced to evacuate as said monster destroyed their entire vessel and the giant alien guarding it. Fortunately, all 10 billion DNA samples of Alien Zamu were archived and spirited by the young alien member named Esura, whose mission is to sacrifice his own life to resurrect his people. The arrival of Mensch Heit and him putting both Ultra Warriors at the edge forced Esura to abandon his mission by replenishing their lives instead. With the destroyer's life ended, DNA samples of Alien Zamu were entrusted to humanity as they began formulate a way to restore their race. 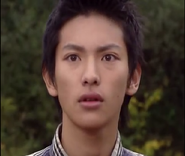 The first Ultra Monster Series Alien Zamu is based on his appearance in the Ultraman Neos Pilot.

The Alien Zamu's spacecraft, as seen in the series.

An unknown Alien Zamu with Gyanzar's eye sculpt in episode 2.

Another unknown Alien Zamu in Episode 2.

A minor Alien Zamu from episode 2.

Another minor Alien Zamu from episode 2. 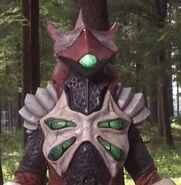 A minor Alien Zamu from episode 6. 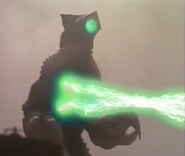 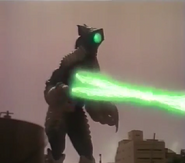 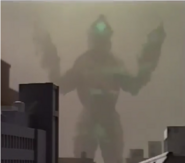 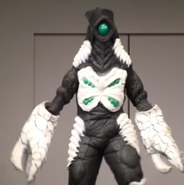 Alien Zamu in a stage show 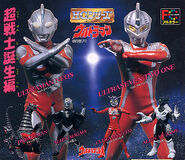