None
Alien Zagon (ザゴン星人 Zagon Seijin) is an alien that appeared in the Ultraman Nice commercials.

Alien Zagon had come to Earth in the hopes of conquering it. With him he brought his monsters: Momo, Blublu, and Tabu to assist him. However, every time he had come to attack, Ultraman Nice appeared and would fight against him, or his monsters, sending them into retreat. After battling him several times, Alien Zagon was finally destroyed by Nice's Very Nice Ray. 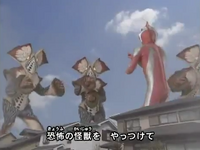 Teleportation
Add a photo to this gallery
Retrieved from "https://ultra.fandom.com/wiki/Alien_Zagon?oldid=538523"
Community content is available under CC-BY-SA unless otherwise noted.