None
Alien Wraith (レイフ星人 Reifu Seijin) is an alien race that makes it's debut in Ultraman Orb THE ORIGIN SAGA. Dr Psychi is a member of this race. They have very long ear lobes that hang down the side of their heads.

Not much is known about the background of this alien race but it is known that a young Psychi lost his parents during a war. Grieving over what they had lost and what he had witnessed during the war, Psychi allied himself with Queen Bezelb to acheive his goal of creating a universe that was free of conflict by using the the Kugutsu. The current situation of the race after the war is unknown. 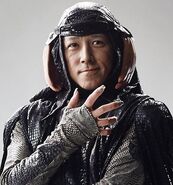