Ultraseven episode 11 "Fly to the Mountain of Evil"

None
Alien Wild (ワイルド星人 Wairudo Seijin) was an alien that appeared in episode 11 of Ultraseven.

Entering Earth’s atmosphere by riding on the metallic space dragon Nurse during a storm, Alien Wild sought to collect specimens of Earth life with his master. His approach was to capture humans and steal their souls through his camera-like ray gun by using it on a group of friends who were taking a photo in the valley that Wild and Nurse were in. Soon enough, both the Ultra Guard and even Japan’s finest went to the valley to investigate as well. However, both Dan and a cop both became victims of Wild’s ray gun. Luckily, the gun as well as a container were left behind when he fled once the Ultra Guard attacked. Upon confiscating the weapon, the Ultra Guard learned that the gun was carrying the souls of the people who Wild attacked, including Dan. Finally, one Ultra Guard member confronted Wild, only to be paralyzed by Wild’s red energy bolts after the awkwardly, furry alien feigned begging for forgiveness. Meanwhile, the Ultra Guard tried to contact those who were trapped within Wild’s weapon but to no avail. The rest of the Ultra Guard returned back to the cave only to find and confront Wild, who revealed his plans for World Conquest. As the Ultra Guard returned the container to him as a trap to rescue their fellow frozen Ultra Guard member, Wild discovered it was empty. Enraged by this, Wild finally told Nurse to destroy the Ultra Guard, who proceeded to chase them into the sky. After a lengthy mid-air battle, Nurse was downed and transformed into a saucer. Wild ran towards Nurse to try and escape Earth. However, the Ultra Guard fired upon him, and Wild was destroyed in a fiery display.

At an unknown point before the series, a single Alien Wild travelled to Earth with his Nurse. The alien arranged a "backdoor deal" with Marluru to allow them to use the schematics of the Nurse it brought, building the Nursedessei with Akito Hijiri as a result. Operation Dragon 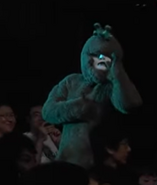 Alien Wild in a stage show 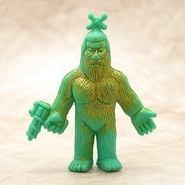