None
Alien Vo-Da (ボーダ星人 Bōda Seijin) is an alien from the planet Vo-Da, that first appeared in Ultraseven X episode 5 "PEACE MAKER".

On the edge of space an war was brewing, a solar system had born two different worlds with civilizations, one was Planet Vo-Da, the other the home of the blue skinned Slender Men who all looked alike. By the account of the slender men, the people of Planet Vo-Da attacked first and the only thing keeping them from winning the war was an object called Orpham, which was an object of importance beyond religious to the Slender Men. It power weakened them leaving them powerless in the face of it light. So counter this they stole it and seemingly unable to destroy it they sent it away. It eventually fell to Earth where enemy refugees where living, who alerted their people of object. One of the slender men headed earth while pursued by a Vo-Da warrior.

Landing after his prey, the hunter went about killing several refugees looking for him eventually attracting the attention of DEUS agents Jin, Kei, and S who fought it in the streets after one of it murders. The alien outmatched them in combat and took of.

Later it appeared again at a government institute where the Oripham was being housed. Jin chased after it while the they went for the stone. Alone the human transformed into Ultraseven X and fought the creature as the first opponent on Earth that could keep up with it. Eventually it seemed as though the Alien assassin would defeat the Ultra but the slender man arrived with the Orpham and used it power to weaken and disorient the beast leaving it wide open for a Wide Shot that vaporized it.

In the end the return of Oripham led to an escalation in the war that ended with both planets and people destroyed. 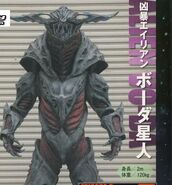