None
Alien Viyell (ヴァリエル星人 Varieru Seijin) was one of the many aliens that invaded Earth in the Heisei Ultraseven series.

A being from ancient times, she landed on Earth long ago seeking to call more of her kind. A being with features both plant and animal like, she is averse to the destruction to nature human civilization is causing. To stop this, she released her mind altering spores into a city, brainwashing its inhabitants and taking on the form of an Earth woman.

Eventually she was found out her ship, shaped like a horseshoe crab emerged from the archaeological site she had awakened from, it was destroyed in a dogfight with the Ultra Hawk as she fought Ultraseven. She was ended by a Wide Shot to a place where she was hit twice by the Emerium Beam. 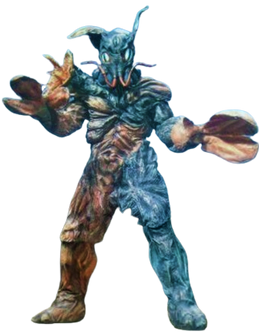