Fireman episode 25 "The Alien with No Home Planet"

None
Alien Virenus (ヴィレナス星人 Vuirenasu Seijin) is a race of aliens that appeared in episode 25 of Fireman.

Virenus came to Earth to invade but his spacecraft was destroyed by SAF. He tries to ask his commanders for help, but they tell the Alien Virenus that the warriors do not have the luxury of making mistakes, so his commanders reject his help and give him one last mission which is to get the bracelet and fight until the end. The bracelet that he had, ended up being found by a girl and uses it as a collar for her pig. Virenus flees to the mountains and tries to find the lost object, attacking people in the process. When Virenus finds the bracelet, he kidnaps the girl that had the bracelet. He then goes to a high place and swears to throw the girl if Daisuke Misaki doesn't give him the bracelet. He gets the bracelet and grows to giant size, which then Fireman appears and fights the alien. At the start, the two fighters seem to have similar powers, but then Virenus start to win the fight and Fireman is about to be defeated, but Fireman kicks him and starts to have advantage. Virenus tries to attack Fireman with his energy blasts, but Fireman reflects it and Virenus loses his left eye. Fireman starts to rag-doll Virenus and throws him to the ground burying him alive. When he tries to escape from the ground, Fireman does his Fire Flash and destroys him. The Alien with No Home Planet

Alien Virenus shooting his energy beams at someone

Alien Virenus being rag-dolled by Fireman

Alien Virenus putting his bracelet in his hand 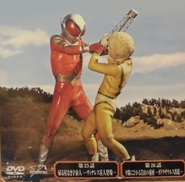 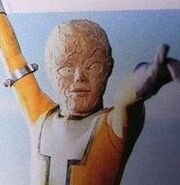 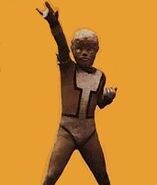