Marri and a second Vibros alien went to invade Earth but their UFO landed in a volcano. Marri then pretents to be a school girl and becomes a date of a kid named Professor, Marri then gets bullied for dating Professor. Then the second Vibros alien commanded Marri to come to the UFO until Takeshi noticed that she was a alien so Takeshi came to her UFO which was now outside the volcano. Marri told Takeshi that she secretly believes Earth is a great place but still has to send Gora to destroy the Earth. Once 80 and Gora fought. Marri told Takeshi to send a note to Professor about her leaving. 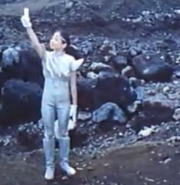 Vibros as she appears in the episode
Community content is available under CC-BY-SA unless otherwise noted.
Advertisement