None
Alien Vibe (バイブ星人 Baibu Seijin) is a alien from the planet Vibe that appeared in Ultraman Leo episode 13.

An alien assailant, Alien Vibe was chased by Gen, MAC and several bystanders. But once he found himself outnumbered, he spins his body in the mid-air to turn invisible and framed Gen for killing multiple people. In response, Gen trained himself harder while at the same time trying to clear his name. The next day, MAC sans Gen chased Vibe and cornered him again as the alien turned invisible and tried to frame one of the MAC officers. This time Dan managed to fire at the alien, canceling his invisibility as Vibe escaped again but Dan let him escape. At MAC headquarters Dan revealed to the team members how Vibe's invisibility worked: he vibrated his body multiple times. Dan contacted Gen to tell him he was proven innocent and reveal Vibe's dirty technique. However, Gen still training himself in order to expose the alien's trap.

Vibe turned large and rampaged. While MAC members tried to attack him from the ground and air, he turned invisible again to attack the two MAC aircraft. Despite taken down one, the other jet that piloted by Dan charged into Vibe's mouth. He activated the self-destruct mechanism, causing both jet and Vibe to explode while in the training, thanks to a pine, Gen understands how the alien invisible and then transforms but as Dan was about to fall, Gen as Ultraman Leo appeared and saved him. 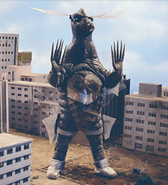 The alien uses invisibility to kill an officer with Gen's knife 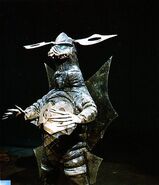 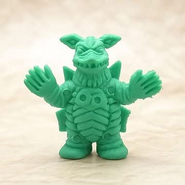