This may not be the article you are looking for. For the alien from Ultraman Taro, see Alien Valky.

None
Alien Valkyrie (ヴァルキューレ星人 Varukyūre Seijin) are aliens of an unknown race from Planet Valkyrie that first appeared in Ultraseven: The Final Chapters.

Angry at the probing of its home world by the aggressive faction of the TDF, Valkyrie attacked the Earth in retaliation. First appearing on the moon, the alien caused great damage including the apparant death of Furuhashi, a long time member of the Ultra Guard and friend of Dan Moroboshi (Ultraseven), who was not far behind after noticing his act of aggression.

Valkyrie fled to Earth with Seven on his trail, he first possessed a crew member of the Moon Base rescue spaceship. Later, he used the new UG in attempt to kill Seven in his human form by possessing them. However, Dan knocked them out one by one until there was only Kazamori under his control. At his own pleading Dan shot the boy, mortally wounding him. With his host now useless, Valkyrie attempted to take over Dan, but the Ultra would have none of that, not to mention that he was different from humans, and he appeared in his true grotesque heart-shaped giant form to battle Seven.

At first, Seven had the advantage but Valkyrie turned the flow of battle with his mist and invisibility. However, Seven was eventually able to counter that ability and destroyed him with the Wide Shot. Despite his intent to stop the Friendship Plan on Earth, ironically his invasion resulted with the beginning of said plan, which resulted with Planet Valkyrie as the first target to be destroyed. 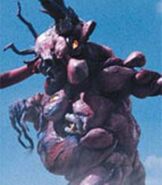 Alien Valkyrie, in his shadow form, about to target a victim

Alien Valkyrie in a stage show with Alien Quraso
Community content is available under CC-BY-SA unless otherwise noted.
Advertisement