Ultraman X episode 9 "We are Nebula!"
Alien Valky (バルキー星人 Barukī Seijin) are a proud alien race from the planet Valky. Several have appeared as either skilled hunters or skilled combatants, all seeking to make their name known.

An alien fisherman from outer space, Alien Valky came to Earth and used a giant aquatic monster from his world named Samekujira to conquer Earth's oceans. Arriving on Earth in the middle of a fight between Ultraman Taro and Samekujira, Alien Valky saw Taro as a threat to his pet and attacked the Ultra as well. Taro was able to handle both the alien and Samekujira, and eventually he destroyed Samekujira with the Strium Beam while Alien Valky fled for his safety.

Afterwards, Ultraman Taro returned the Ultra Badge to Mother of Ultra and Kotaro Higashi was left with his humanity so he could live a normal life once again. Unfortunately, Alien Valky had unfinished business to settle with Taro and he returned to confront Kotaro, intent on killing Ultraman Taro's former human host for the destruction of his prize and goal. Using his brains and quick wits, Kotaro lured Alien Valky into an oil refinery where he used his gun to blow it up, setting the crazed alien fisherman aflame and killing him.

Though Valky was no more, his arrival on Earth heralded the start of a New Age of Aliens, which would commence a year later.Farewell, Taro! The Mother of Ultra!

Alien Valky reappeared in episode 16 of the series Ultraman Mebius.

An Alien Valky was the next alien to confront the alien swordsman known as Zamsher, after the latter killed two Alien Magmas on a meteor that was heading for Earth. Wanting to make his name known throughout the universe, Alien Valky fought with Zamsher on Earth, but after a short battle he too was killed by Zamsher. He was in pursuit of Ultraman Hikari before his death. A Sword Master from Space

He teamed up with Mukadender, Froguros, Gromite, Angross, Lunaticks, Jasyuline, Roberuga II, Kelbim, and Birdon to take on Ultraman Mebius. When Mebius and Gomora fired their beams, Alien Valky survived by running away from it, causing two other monsters (Angross and Zoa Muruchi) to die. Valky was called back along with the surviving monsters to watch Reionic Burst Gomora fight the Ultras and was then sent back out to fight Ultraman Zero. He was eventually the first one of the last six monsters killed by Ultraman Zero's Zero Slugger Attack followed by Fire Golza, Alien Guts, King Joe Black, Zetton, and Tyrant.

An Alien Valky and his baby Samekujira pet, Samekichi, entered a planet to free the aquatic kaiju. While Sora and Ultraman Joneus detected an alien activity on that planet, Valky approached both of them. He revealed the recent activity came from him. Joneus then fought the alien. As they're both equally matched, Sora found Samekichi and brought it. He then explained the actual reason came to the planet because Samekichi needed a bigger habitat to be raised instead of a small pond he had. Joneus suggested using the Little Beam, it could stay in a small size for the rest of its life, and the Ultra People could take care of the infant. Helped with that, Valky sobbed and thanked Joneus.

Alien Valky returns in this series where he becomes one of the underlings of Dark Lugiel, granted the mission to spread chaos and feed evil hearts to his master by corrupting any individual with the Dark Dummy Spark. He was defeated by Ultraman Ginga and Jean-Nine in his giant form alongside Tiga Dark.

"Sometimes in life, things just don't work out. But its when the going gets through that you got to remember to smile, right?"

Sometime prior, an Alien Valky named Halky (ハルキ Haruki) adopted a baby Samekujira and named it Jolly. He left his planet and pet afterwards. He befriended other two aliens Nackley and Icary, and settled in a rent home on Earth called Nebula House (星雲荘 Seiunsho). The three worked in a human society, with Halky's human form Haruki (春木, Haruki), taking the job of a craftsman. Wanting a new housemate to ease their monthly rent of 15,000 yen, they find Isamu and accepted him.

Learning that Isamu was a former rugby player, they help with his problems. However, one day after Isamu's arrival, Valky's aforementioned Samekujira Jolly appeared, who wanted to reunite with its master after missing him. This accidentally attracting the Dark Star Cluster's attention, and they challenge the thieves in a rugby match. After three days of training, the Nebula House residents manage to win the match. They thank Isamu for his help and allow him to rejoin his rugby team. We Are Nebula!

Another Valky appeared as a Cyber Card in the final episode of Ultraman X. After Ultraman X spoke out to Gomora and struck Greeza right in the center of his chest, Valky, along with all of the other Cyber Cards, traveled to X and united with him. Cyber Valky's power was used to help form the Hybrid armor and power up the Ultimate Xanadium to defeat Greeza once and for all. Valky, along with the numerous other Cyber Cards and Spark Dolls, then appeared and thanked Daichi as he thanked them. The Rainbow Land

Alien Valky reappeared in the puzzle role-playing game for mobile devices, Ultraman Galaxy as a C (Common) card that you can unlock him in one of the levels in the game with a very high chance of getting Alien Valky.

Alien Valky was released in 2013 as part of the Ultra Monster 500 series. He stands at 5in tall and is #33 in the series. He has a very accurate look at his appearance and has 2 points of articulation. 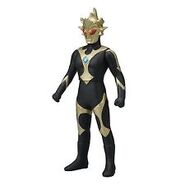 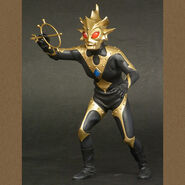 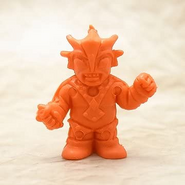