―Alien Vairo leader before he died.

None
Alien Vairo (ヴァイロ星人 Vairo Seijin) are aliens from the planet Vairo, that first appeared in Ultraseven X episode 7 "YOUR SONG".

On the Planet Vairo, the leader of that world personally hands out masks to his subordinates, as a pledge of loyalty they are to never remove them even onto death. They also seem very militant as they send out scouts to examine planets for invasion. One single member Nataru was sent to spy on Earth but soon started to like the planet and its culture. One day after meeting Agent D, she decided to defect from her planet by removing her own mask and alongside the agent, the two eloped from their respective factions. Sometime later, Nataru's people learned of her actions and they sent an extermination squad to kill her. At that time, Nataru had become a street performer, her music had the strange effect of calming those around her. One of these individuals was Jin another member of DEUS, who protected her when Vairo forces attacked her in an alleyway. Jin was injured and taken care of by Nataru who deduced he was the red giant thanks to his glasses. Though she thanked Jin for his help and returned his glasses, Nataru left him to deal with Vairo soldiers as she went of to save her beloved. She found D with S and K fighting of the last of Vairo solders, their unit leader, who was abnormally strong compared to his men. Nataru saved D from a sonic blast and with blasters in hand took down the last solder. Unfortunately, before he died, the Vairo captain summoned their bio-weapon, Vadoryudo, from their ship. As the large bio-mech fired on them, they were save by the Eye Slugger which destroyed the beast and returned to Seven X who destroyed the ship with the Emerium ray. With that over Nataru and D were allowed to go their way in peace.

It should be noted all of their abilities are technologically based. 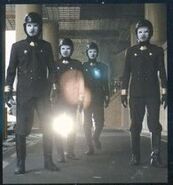