Ultraman Leo episode 4 "A Vow Between Men"
Alien Tsuruk (ツルク星人 Tsuruku Seijin) is an alien that appears in the TV series, Ultraman Leo. He appeared in episodes 3 and 4.

An alien creature that arrived in Japan with the goal of ruining the reputation of Ultraman Leo after his victory against Alien Magma. The Tsuruk's first move, while in a smaller disguise designed to look like Leo, was to murder the father of Toru Umeda and his sister Kaoru. After the alien brutally murders Mr. Umeda, he left a piece of metal with the face of Ultraman Leo carved into it at the scene. Then when a MAC officer offered to take the orphaned children into his family's care, Alien Tsuruk brutally murdered him as well. Realizing the alien's motivation, MAC captain Dan Moroboshi tried to confront the murderous space man. After a quick skirmish Dan manged to wound Alien Tsuruk's eye forcing him to flee.

The next time Alien Tsuruk appeared, he transformed into its towering, giant form, furthering its reign of destruction. Alien Tsuruk was on a rampage, ripping the city apart with its giant claws. When MAC's weapons failed, Ultraman Leo came into battle. Throwing his kicks and punches against the beast, the bladed creature waded through them and repeatedly smashed the hero to the side again and again! Soon Leo’s color timer began to flash and he was thrown into the water and handed his first defeat while on Earth. This left Tsuruk to continue its assault, cutting buildings clean in half as the Monster Attack Team kept trying to stop it.

After more failed attempts at vanquishing it, and once Gen Otori finished training yet again, Ultraman Leo was called in for his second duel with the alien. The giant managed to land several blows before energizing his fists (Leo Chop) and chopping them through Tsuruk’s arms, severing them. Alien Tsuruk was then impaled by his own blades and died, ending his rampage. 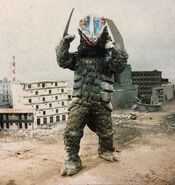 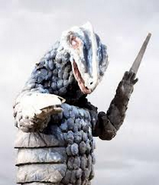 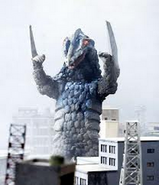 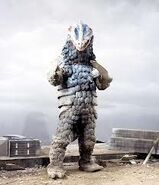 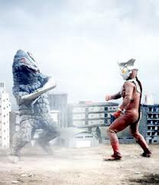 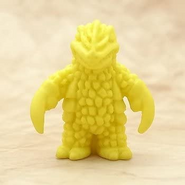