None
Alien Terrorist (テロリスト星人 Terorisuto Seijin) was an alien that appeared in the series Ultraman Taro, in episode 38.

The Terrorists were evil and cruel aliens. As Kotaro was shown how a girl he met was given a crystal ball by Alien Miracle, they both witnessed Alien Terrorist attack and kill Miracle with his sword, seeking Miracle‘s crystal ball. Moments later, Terrorist appeared and began destroying the city, searching for Miracle’s crystal ball. He spotted the girl, who was now in possession of it, and tried to kill her to gain it. When he lost track of her, he began destroying everything around him as well. Kentaro tried to stop him but when his gun failed, he called Taro into the fray. Taro quickly began battling the alien and overpowering him as ZAT showed up to aid the hero. Try as he might, it seemed as though Terrorist couldn't win until he discovered a natural gas plant behind him. Shielding it with his body, he suffered several hard hits from Terrorist’s attacks. With Taro down, Terrorist turned back to the plant, prepared to destroy it but Taro kept rising up to try and stop the alien, but was already badly wounded. However, the girl threw the crystal ball into Terrorist, exploding with enough force to fatally wound the alien. Terrorist staggered and finally fell dead, freezing solid. Taro then picked up the monster’s body and through him into the air, destroying him with the Twin Energy Streams, his body exploding into snow. 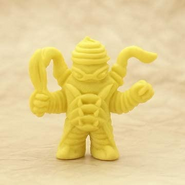 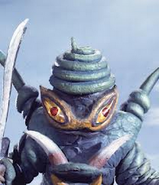 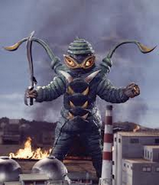 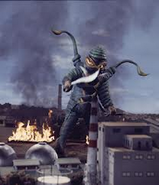 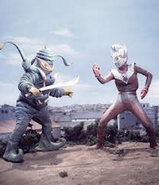