Ultraseven episode 41 "The Challenge from the Water"

On a peaceful night at a Japanese lake, the Alien Tepeto begin their operations on Earth by frightening civilians. The Creature Club which had been searching Japan for strange and fantastic monsters and aliens had been attacked by an Alien Tepeto, resulting in the death of a fellow colleague. Although they had reported the sightings to the UG, they had already been conducting a secret investigation since this wasn't the first time a creature had been spotted within the area. Although the area was not permitted, the Creature Club continued to search for anymore lake aliens as they could report it and gain a big scoop. The Ultra Guard conducted their investigation, but doubted the existence of any lake creatures. However, Dan Moroboshi knew something was out there. After furthering their search, Dan and Anne were attacked by the Alien Tepeto. While the Ultra Guard continued to search the area, they were attacked from underwater by the Tepeto's Missile Defenses. Dan, whom was trapped by them could see the Tepeto command center, but was in no position to stop them. Later, a giant egg appeared revealing itself to be Tepeto, a bio weapon created by the Alien Tepeto. On the shore, Furuhashi protected the Creature Club from two attacking Alien Tepeto. After Ultraseven emerged and defeated Tepeto, the remaining Alien Tepeto made an attempt to retreat, but were shot down by Captain Kiriyama who was piloting the Ultra Hawk No.3. 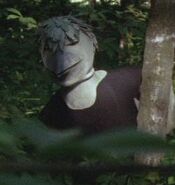 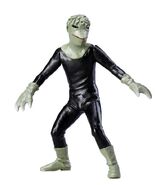