Ultraman Taro episode 33 "5 Seconds Before the Great Explosion of the Land of Ultra!"

Ultraman Orb The Movie: Let Me Borrow the Power of Bonds!
Alien Temperor (テンペラー星人 Tenperā Seijin) are a race of aliens that debuted in the TV series, Ultraman Taro. The first Alien Temperor appears in the two-part episodes 33 and 34.

The aliens of Temperor Nebula, like other alien evildoers bent on control of galactic civilization, were sworn enemies of the people of the Land of Light. One individual alien of the people of Temperor, and his subordinate, sought to destroy to Land of Light out of their pure hatred of their people, seeing them as the greatest obstacle to their galactic conquest. But his scientific adviser (a cymbal-banging monkey) advised of the Ultra Brothers' inevitable interference.

To ensure their victory of destroying the people from the Land of Light, the two beings of Temperor set out to attack Earth and destroy the Ultra Brothers by attacking their newest member; Ultraman Taro. Immediately after arriving on Earth, the Alien Temperor sent out his subordinate into the middle of Tokyo city, who then grew to a giant size and soon lured out Ultraman Taro. The Alien Temperor began to destroy Tokyo, calling the attention of the ZAT forces. However, their weapons were powerless before the man from Temperor, who laughed at their wasted effort. Finally, Kotaro Higashi summoned Taro into the battle, however he wasn't confident he could defeat the alien, as he knew of their terrible weapons. Instead, the Ultra Warrior tried to lure Alien Temperor out of the populated area, and then made a retreat. Meanwhile, ZAT continued to attack the invader, but he used his flames to force ZAT to retreat, and he shot down one of their fighters. Suddenly, Zoffy came to save them before flying off, taking ZAT and a scientist as temporary hosts for himself and the veteran Ultra Brothers, to keep themselves hidden from the Alien Temperor.

Taro then returned to battle against Alien Temperor, with an energy blast followed up by the Strium Beam, but it had no effect on the evil alien. Alien Temperor crushed Taro with his electric whip, then he pummeled Taro, choked him with his toxic gas, burned him, and continued to beat down Taro. Taro was very injured, and had no power to beat Alien Temperor, causing him no option but to retreat. With no other choice, however, Taro returned to battle once again, only to be whipped and beaten all over again. With Taro beaten for the third time, the five Ultras finally appeared to face the alien invaders. Before the two alien forces could really begin their fight, Taro once again returned to face Alien Temperor, but this time Taro had a new strategy. Taro became human-sized and flew inside Alien Temperor subordinate's mouth, and then destroyed him from the inside by growing to his giant size. Five Seconds Before The Great Explosion Of The Land Of Ultra!

After the defeat of the subordinate, Leader Alien Temperor used their people's advanced technology to revive him, and ordered him to continue on his mission to destroy the Ultra Brothers. As the Ultra Brothers were celebrating, the alien's spaceship appeared and resurrected him in front of Kotaro. He used his special vision to see Kotaro, and then taunted him. Kotaro continued to fire on Temperor, who flew to the sky to await a true challenge as Kotaro told the Ultra Brothers that Temperor was brought back to life.

A while later on that same day, Temperor attacked Tokyo, creating a fissure on Earth. Kotaro distracted the alien, making him dizzy. ZAT appeared and started to attack Temperor, but it was useless again, Temperor was mocking them, but Kotaro continued to annoy Temperor. Temperor got so dizzy that he toppled over. Annoyed and getting tired of the tactic, he returned to his spaceship again.

Thinking of a new tactic, he turned into his Temperor Spider form. Temperor soon captured Kotaro, and returned to his normal form, he and holding Kotaro with a rope he started to torture him and then rub it in the face of his brothers that he had caught Taro. However, Kotaro escaped, landing on the nose of one of ZAT's planes, as the other Ultra Brothers helped get him to safety, unknowingly letting Temperor discover their new hosts before trying to kill them all. Despite Temperor's best efforts, the Ultra Brothers escaped with their hosts as Temperor was wreaking chaos on the Tokyo.

Soon, the Ultra Brothers were forced to give their life force to the five members of ZAT and Professor Ohtani. Temperor discovered them again, but they managed to escape from him. Very furious, he continued destroying Tokyo, leaving it in ruins. He was soon going to attack Kotaro, but the Ultra Brothers had a plan. Hiding inside several toys that were thrown at Temperor the brothers ambushed and confronted him. He attacked with everything in his arsenal but the Ultras resisted his attacks. Ultraseven, Ace and Jack all fired at him but it didn't take him down. Temperor blasted the Ultra Brothers, making some of them to fall to the ground. While he was laughing, several of the Ultras fired their beams together to the alien, causing a cyclone of energy that stunned him long enough for Taro to cut off the alien's arms, leaving him powerless. All the Ultra Brothers picked up the alien, and after throwing him high to the air, Taro used his Neo Strium Beam to destroy the tyrant. His ship tried to revive him again, but several Ultras fired their beams on the ship, causing it to be destroyed, ensuring Temperor was dead once and for all. The Last Day of the Six Ultra Brothers!

Another Alien Temperor reappeared in the film, Ultraman Mebius & the Ultra Brothers.

Arriving on the city on their invincible ship, another Alien Zarab, Alien Guts, Alien Nackle, and Alien Temperor made an alliance to free the evil U-Killersaurus, a almost almighty monster, and Yapool. While the aliens were planning their attack, they found an obstacle: Ultraman Mebius. Temperor suddenly spoke and said that he will confront Mebius himself, and after he destroys him, he will become leader of the alliance. Nackle said he can go and fight him. The other three aliens used Temperor as a tool to study Mebius' powers. After the alien arrived on Kobe, he called out Mebius, and started to attack and destroy the city. When Mebius appeared, they started to fight. After a heavy fight on both ground and sky, they both ended in the sea. After Temperor fired his most powerful attack at Mebius, Mebius used the charge of the Mebium Shoot to repel Temperor's attack, then quickly Mebius fired his beam, making Temperor's ray vanish. He blocked the hit, but it was too powerful causing his destruction. The other three aliens mocked Temperor, saying that his words are louder than actions, but Zarab was grateful to him, since they found the information on Mebius they needed.

Temperor is first seen defeating Alien Mefilas in battle. Instead of killing him, Temperor smashes Mefilas' Battlenizer and leaves him for dead. Later, Temperor encounter Mefilas, who has now become Armored Mefilas, and tries to kill him with his Arigera. But, soon, Mefilas kills both Temperor and Arigera with one slash of his sword (which was actually stolen from Armored Darkness).

Alien Temperor reappeared in the film Mega Monster Battle: Ultra Galaxy Legends The Movie as one of Ultraman Belial's 100 Monster Army. He teamed up with Alien Super Hipporit, Zoa Muruchi, Telesdon, and Arstron to take on Gomora. He was called back along with the surviving monsters to watch Gomora fight the Ultras and was called back and teamed up with the remaining monsters to fight Ultraman Zero. He was the second monster to be killed by Zero's Wide Zero Shot in the final battle behind Telesdon and followed up by Vakishim and Gudon.

In episode 7, him along with many different monsters he is seen cheering on Ginga as he fights Dark Galberos. The Closed World

It is likely that the Alien Temperor returned to space in his original form after Ginga defeated Dark Lugiel.

An Alien Temperor appeared in the movie under the name Batista (バチスタ Bachisuta), summoned by Murnau via her Dark Ring alongside Alien Guts Doppel and Alien Hipporit Callisto as part of her Dark Alien Army to finish off Ultraman Orb, who was about to be finished by Alien Gapiya Sadis at the time. The three of them unleashed their signature attacks on the Ultra, with Batista's being his flames, knocking him down in the process and leaving him wide open for the three of them to capture Orb for Murnau and transported away, leaving Sadis frustrated.

He was later ordered by Murnau to help out Darebolic alongside Callisto and later grew giant together and fought against Ultraman Orb in his new Orb Trinity form, who effortlessly defeated Sadis, until Zeppandon showed up to give the Ultra a hand. Batista took on the fusion Kaiju alongside Callisto and while they had trouble with him at first, the Kaiju ran out of fire later on and found himself at the mercy of the alien duo as they beat them up and defeated him with their flames and lasers respectively, forcing Zeppandon to revert back to Jugglus Juggler's human form, and then joined Darebolic in ganging up and beating up Orb alongside Callisto.

Just as things seemed bleak, Jugglus used his powers to cast away the Dark Ring, which resulted in the Ultra Warriors, Ginga, Victory, and X being freed from being space jewels after they unleashed energy blasts at the trio. After being joined by Guts, the alien army launched their attacks on the Ultras, who deflected and dodged the attacks and Batista ended up fighting Ultraman Ginga alongside Callista, who chose to fight Ultraman Victory. During their fight, the Temperor unleashed his signature flame attack on Ginga, but the latter jumped up to dodge it and then counterattacked with a Ginga Thunderbolt. Later on, the alien duo decided to end their fight when Victory and Ginga summoned the Shepherdon Saber and Ginga Spark respectively and launched their combined attack against the Ultras' Ginga Victory Ultimatum, but the latter won the beam struggle in the end, resulting in the two aliens being destroyed, and ending their service to Murnau. Ultraman Orb The Movie: Let Me Borrow the Power of Bonds!

Alien Temperor (Showa)
The people of Temperor's strength mostly comes from their advanced technology, which is powerful enough to harm Ultras. 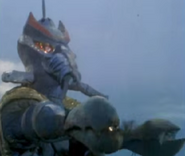 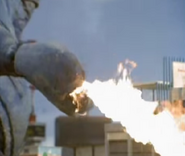 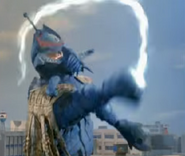 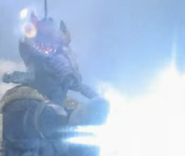 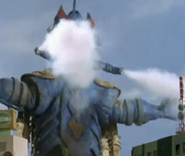 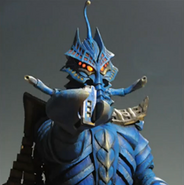 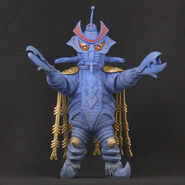 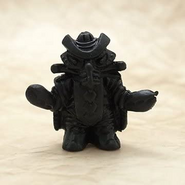