"That time for vengeance has finally come. Against Earth, and against you, from the Nebula M78."

―Alien Tarla as he declared his vengeance to Kaito/Ultraman Max

None
Alien Tarla (ターラ星人 Tāra Seijin) was an alien that appeared in the television series Ultraman Max.

One day, two strange artifacts were discovered. One was a puzzle and the other a sacrophagus. Professor Yukari witnessed a familiar figure on one of them. As Kaito and Mizuki were sent by DASH to retrieve the artifacts, the puzzle accidentally activated when touched by Kaito, causing a strange door to appear with a strange figure materializing from it and attacking. Luckily, he was defeated by Kaito and archaeology expert Ozaki and retreated to the door but not before dragging Mizuki along. Back at Titan Base, Elly attempted to undo the puzzle but could not. Meanwhile, in the other world, Mizuki fell from a cliff after being attacked and crucified by the mysterious figure. DASH leapt into the dimension and detected Mizuki but she warned them not to as Gilfas appeared and attacked them. Though they managed to save Mizuki, Kaito was separated from DASH by a blast and captured by the alien. The alien managed to steal his gun and the Max Spark and revealed that his name was Alien Tarla.

Tarla explained that a long time ago, Planet Tarla's citizens suffered from a food shortage. They decided to create a portal that linked to Earth in search of food. The humans warmly welcomed them and gave them some food. However, they also found out that humans' fondness of battling each other was threatening the planet. Believing that if they were lead by a strong being, the Earth will be saved so they became the ancient humanity's rulers. One day, a being from Nebula M78 appeared saying that enslaving humans was a great mistake and battled Gilfas. After liberating the human race, he locked the dimensional travel device underground and sealed Alien Tarla's fate as they died of starvation. But one survived, intent on revenge, and gained his wish as the portal opened. The alien kidnapped Mizuki to sacrifice to Gilfas, and then to kill Max.

However, Kaito outsmarted the alien and regained the Max Spark as he transformed into Ultraman Max and finished off Gilfas. As the others returned, Alien Tarla chased them but Koba shot the alien down as DASH escaped back to Earth, leaving Alien Tarla trapped in a dimensional rift. 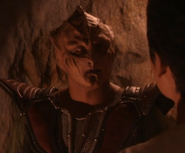 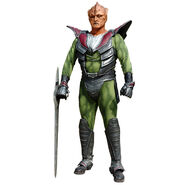 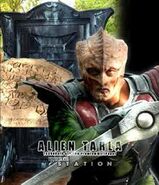