"Our homes were burned down by humans, and that's why our bodies are red. On Planet Talk, we threw away our weapons 3000 years ago without any resistance. But humans are more brutal... It's taken me 300 years to complete our planet's weapon. So, to the humans that think that weapons are toys, let me show you the horror of a real weapon."

While rock climbing one day, Anne Yuri falls due to some weathered rock and gets separated from here group. After wandering, she comes across a mansion. Entering, Anne is chocked by an Armored Human, a servent to the Talks, when it is stopped by an Unnamed Talk as he believes Anne to be his deceased sister Shissy. When talking to each other, Talk explains his outrage towards humanity as his and Shissy's parents and their colleges were murdered by human after they set their residence on fire.

Concerned for Anne's safety, Dan and Furuhashi head out to look for her. While Furuhashi distracted the Armored Human, Dan rescued Anne and retrieved a note. Back at the Ultra Guard HQ, they examine the note and find out that the Talks came from a planet similar to that of Earth and wanted to come to Earth to learn more about the inhabitants and possibly become allied forces. However, they were surprised to find out that Earthlings had a tendency to sell weapons and kill each other without remorse. As such, they took refuse in the mountains and created a private settlement.

Just then, some personnel report that shadowy figure on horseback was looking for Anne, still under the impression that it was Shissy. Anne picked up a silver flute that she had recovered along with the note and left after him. When outside, Talk revels to Anne that his orange appearance is a remnant of the damage he sustained when most of the settlement was burned down. He also reveals that his race abandoned weaponry 3000 years ago in order to sustain peace, but that humanity can't seem to live without it. He persists, even when Anne finally refers to him as her brother. He next reveals, that he has spent the last 300 years finishing his colony's goal of creating the ultimate weapon to destroy humanity if it was eve needed, which he now believes is that time.

Captain Kiriyama forms a plan to kill the alien by having Anne lure it toward the mansion with flute and shoot it with a hive of agitated bees to hopefully kill it. Anne was reluctant to do so, but persevered with Dan's support. After luring it within range of fire and everyone but Talk out of the way, a shot was taken and was a direct hit. Now dying, Talk gave out one final cry for his sister before falling over dead. From his dead body, however, comes a demon-like, giant version of himself. He chases after Dan and Anne and tries to crush them with his newly attained hammer. Anne escapes, but Dan falls off of a cliff near the mansion, where he transforms into Ultraseven whilst falling.

The two battle, leading to Talk being set on fire once again and Seven being tied up in Talk's body cloak, immobilizing him. Anne calls out to him and claims that this isn't the way to get revenge. This act loosens his grip on Seven, allowing him to break free and finish Talk off with a shot from his Emerium Beam. Anne then remarks "Hatred made Talk a demon, to love and forget. Talk! Please go to heaven. You were a very friendly brother!". 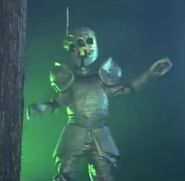 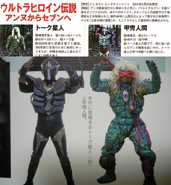 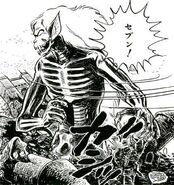