Ultraman Ace episode 40 "Give Back the Panda!"

Alien Steal (スチール星人 Suchīru Seijin) was an alien from Ultraman Ace that appeared in episode 40. A kleptomaniac alien from Planet Steal, Alien Steal travelled to Earth to loot merchandise, but was thwarted by Ultraman Ace.

Numerous robberies have taken place, all involving the stealing of panda merchandise, including the robbery of a store witnessed by Hokuto. Due to it being a slow day at TAC, Hokuto decided to investigate the robberies, only to find they were the doing of Alien Steal, wanting to bring the clear cash cow that is Pandas to his homeworld for the children there to enjoy. Steal fought with Ultraman Ace after the latter saved a store owner, children, and a panda they befriended. They both fought hard with Ace's throwing him around and Steal's fire attacks, Ace eventually finished him off with an unknown attack followed by the Metalium Ray. 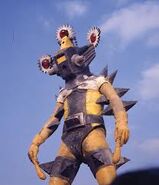 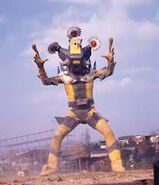 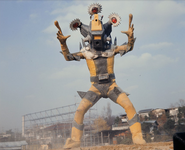 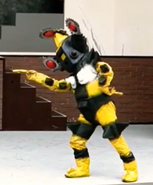 Alien Steal in a Stage Show 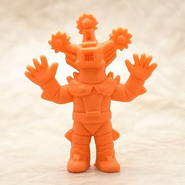