Abolbus: TBA
Redle: TBA
Alien Standel (スタンデル星人 Sutanderu Seijin) is an alien race first seen in Ultraman Tiga. Their world and race was divided between the light and dark sides of the world. The Standels can be weakened or killed by light or darkness depending which side they come from.

Two aliens came to earth, the nocturnal Abolbus (アボルバス Aborubasu) and the solar powered Redle (レドル Redoru). Redle was the red one, from the light side of their planet. Abolbus was the blue one from the dark side of their planet. Their ethnic groups were at war with each other for many years, to tip the balance in either's favour, they needed fighters that could stand both light and dark. Abolbus began kidnapping people who demonstrated any form of violence or a skill in fighting after dark. This included an action star and several other fighters. When he tried to kidnap a boxer, he was interrupted by Redle who he soundly defeated. The boxer and his girlfriend called GUTS about the incident, but by the time Daigo and Shinjoh arrived on scene the two aliens were gone. Redle stayed at an old woman's house, who took care of him as he reminded her of her policeman husband who had passed away. The next day, while she was out shopping Redle came to her rescue after she was assaulted by two punks on a bridge. Helping her up, he took to her destination via a piggy back ride, only to be stopped by GUTS who were calmed down when he explained himself. He told GUTS why he was on earth, of how their planet was divided between the light and dark sides and how Abolbus had come for fighters to tip the balance in his sides favor. With the old ladies advice, GUTS decided to stage a fight to lure the dark side into a trap. That night as they put their plan into motion, only Shinjoh and Daigo were taken while Hori, who was left to watch the alien had found that Redle was gone. Daigo found himself on Abolbus' ship, a dark realm. The alien demanded that Daigo, who he noted as different, surrender to his will, when he refused the alien moved to attack but Redle appeared and attacked. His power was weakened by the darkness and beaten. Abolbus, though victorious, fled and grew to a giant size. Daigo helped up Redle who said he would free the others but that Daigo had to face the alien himself. Daigo took out the Spark Lens and Ultraman Tiga appeared. The two giants battled, then Tiga, hearing Redle's words, unleashed his light on Abolubas killing him as he melted. Redle left for Planet Standel, returning all the people Abolbus kidnapped and revealed that he had came to Earth for the same reason and told Tiga to thank the old lady who helped him. 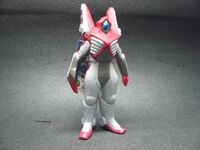 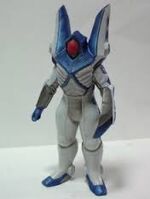 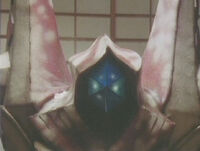 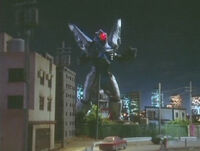