None
Alien Srayu (スレイユ星人 Sureiyu Seijin) is an alien race that appeared in Ultraman Cosmos. Despite this, only one appeared, named Lamia (ラミア Ramia).

Long ago in the past, Planet Srayu was a utopia, a planet with no armies that enjoyed a time of peace. However this peace was destroyed by invaders who attacked the planet. Afterwards the people of Srayu decided that any planet that was deemed a potential threat to them would be destroyed. Discovering Earth, they sent Lamia, a representative for them to brought the planet annihilating robot Guinje to Earth. Upon arrival, the SHARKS attack force attacked Guinje, the UFO vanished but not before it dropped an escape pod that contained an unconscious Lamia. While under the care of SRC, Lamia awoke a week later and escaped. Seeing the heavy military presence in the city, she deemed Earth a threat. When she tried to activated Guinje, a group of youngsters stole the key from her and ran away while unintentionally activating the robot killer. It emerged from a building where it was camouflaged and transformed into robot mode. The robot was proven a challenge as it could withstand the combined assault from Team EYES, SHARK forces and Ultraman Cosmos. Doctor Noboru returned the key to her and asked the alien to deactivate the robot but only for his words to fall on deaf's ears. The military forces approached the girl, as one of them accidentally fired a pistol but Dr. Noboru took the bullet instead to defend Lamia. Witnessing the doctor's bravery in saving her, Lamia embraced and healed him, changing her view towards mankind and deactivated Guinje then departed away from Earth. 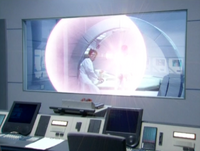