"Earth is a beautiful planet, so we the people of Sran have decided to make it a second home for ourselves."

Alien Sran (スラン星人 Suran Seijin)[1][2] are a race of aliens who debuted in episode 4 of Ultraman Max. They came from the planet Sran to make Earth as their second home and annihilate humans for having caused so much pollution on Earth.

One night a power plant mysteriously shut down. When the power returned, two workers are killed by a blue beam and soon a security guard by the blade of an alien known as Alien Sran. At the same time DASH picked up alien activity that was traced to a football stadium. Before Mizuki Koishikawa and Kaito Touma left the stadium, Kaito saw something running by him at high speeds. The two chased the speedy object down and once it stopped it turned out to be a stadium guard that was really Alien Sran in disguise. Shots were fired, but the alien used an energy shield to protect itself. Mizuki and Kaito then tried to escape Alien Sran in the car DASH Alpha, but the fast creature easily caught up to them and soon used an EMP field from his arm blades to stop them cold. DASH Alpha was placed into Sran's ship as it's stadium disguise faded and it blasted off. DASH quickly went into the air to intercept Alien Sran before he reached outer space. Onboard the ship, Alien Sran told Mizuki and Kaito that Earth would be a new home for all the Alien Sran as they viewed humans as polluters that are killing the planet. Once DASH Mother used a laser to severely damage the alien's ship's energy cannon the saucer was crashing towards Earth and the two DASH members made it out with DASH Alpha. Before DASH Alpha landed, Alien Sran grew to the size of a giant at the place his saucer crashed and shot it down. Sran continued his rampage by destroying a small down in one assault as DASH deployed both Birds. Sran tried to confuse DASH by making illusions of himself, but quick calculations ended the illusions quickly. When one of the Birds was shot Kaito turned into Ultraman Max and saved them. Max was easily outdoing Sran in hand to hand combat until the alien monster created illusions and began to assault the hero faster than he could react. Even though his Color Timer went off Max didn't give up, he then used the Maxium Sword and cut through the illusions and surprised Alien Sran with the Maxium Cannon, blowing him into pieces.

Alien Sran ambushed Ultraman Ribut and Ultraman Max while they were patrolling Planet Mikarito, infecting the latter with Gudis' cells, weakening Max. Sran intended for the virus to fully infect Max, turning him into a monster that would be fed to Maga-Orochi's egg to accelerate its evolution into Magatano-Orochi. Ultra Galaxy Fight: The Absolute Conspiracy

Three days later, when Ribut, Powered and Great arrived to rescue Max, Sran and Hellberus immediately reappeared and began tag-teaming the three Ultras, aided by Max, who had been brainwashed into a berserker-like state by the effects of his infection. While Ribut attempted to treat Max with the artificial antibodies developed by Ultraman Hikari and Sora, Great and Powered kept Sran and Hellberus busy. As Ribut successfully treated Max with the antibodies, Maga-Orochi finally emerged, but Sran and Hellberus were unable to join it, as Xenon suddenly arrived and joined Max and Ribut in fighting the Lord Monster after recharging Max's energy.

Sran failed to put much of a fight up against Great, who quickly defeated him with his Burning Plasma, with Sran falling to the ground and exploding. Sran somehow managed to survive his defeat, and was later met by his master, Absolute Tartarus, who reprimanded him for his failure in spite of being given everything he needed to carry out his plan. Though the alien begged for another chance, Tartarus refused to forgive Sran for his failures and killed him with a shot of his Hand Beam. Ultra Galaxy Fight: The Absolute Conspiracy

An Eteldummy of Alien Sran was created by Etelgar along with the other opponents. He stationed himself on the second floor of Arena's castle, waiting for Ultraman Max to fight him. Sran used his duplication ability to evade Max, but Max used the Maxium Sword to knock him down. Max then defeated Sran with the Max Galaxy. Ultraman Ginga S The Movie: Showdown! The 10 Ultra Warriors!

"I haven't a speck of interest in conquering this world. My only target in all of this is Ultraman Max! I'm putting X to good use, so I might avenge my brethren. Ultraman X's power plus Zetton's power equals the birth of the ultimate warrior!"

Many years after the events of Ultraman Max's time, an Alien Sran named Quila (クワイラ Kuwaira) traveled to an alternate Earth, where his goal was to use Ultraman X to enact revenge on Max for killing the first Alien Sran. At some point after traveling to The World Where The Ultra Flare Occurred, Quila came into possession of a Zetton Spark Doll, and after studying Xio, and UNVER then learning of Daichi Oozora, he used the human form of a researcher, with his face based on the Max's former human host, Kaito Touma.

He unleashed his Zetton during the daylight and introduced his guise as Dr. Touma to Xio the next day, "assisting" them in creating Zetton Armor for Ultraman X to wear it when battling Zetton. Then when he re-released Zetton for X appear, he activated a program that rendered X immobile while Zetton rampaged. Ultraman Max in the disguise of his former host revealing the impostor but while he was quick to join X in his battle against Zetton, leaving Quila to Xio, but Quila's virus in Xio's Zetton Armor suddenly brainwashed X, who was forced to band with Zetton and overpower Max. It wasn't until Daichi used Cyber Eleking to destroy the virus and finally assist Max. Quila fought Max and was destroyed by the Max Galaxy's Galaxy Cannon. X in Peril

Released as a mail-away order for the May 2006 issue of the Hyper Hobby Magazine, this Ultra Monster Series Alien Sran is a magazine-exclusive figure. Molded in black soft vinyl plastic, Sran features metallic dark purple, silver, and some metallic orange-yellow paint operations.

Alien Sran released along with a translucent yellow redeco of the IF figure.

6 years later, the Alien Sran figure is re-released under the Ultra Monster Series lineup, labelled as an EX. Changes include the purple paint being bluish, and several of the details are omitted. 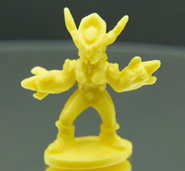 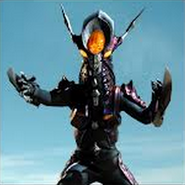 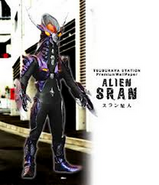