Ultraseven episode 12 "From a Planet With Love"

None
Alien Spell (スペル星人 Superu Seijin) are aliens who appeared in the banned episode 12 of Ultraseven.

After a young girl is found lying dead in the street, the UG is called in to investigate and discovered that the watch she was wearing might have contributed to her death. The Ultra Guard went on reconnaissance work until they found a vendor selling the same watches. After following him to a strange building, they discovered that he was an alien (known as Alien Spell) talking with the council from his home world. Alien Spell and his council began to speak of eliminating humans so they wouldn't massacre their race with nuclear war, like on their own world. The next day a strange ad appeared in a newspaper, telling children to stop by the strange building for free watches. The Ultra Guard did their best to stop the children from entering and barely managed to hold them off. Following that, the building exploded with Alien Spell growing in size and terrorizing them. Alien Spell tried his best to get the kids to not run away from him to no avail. The Ultra Guard sent their fighters to stop him, but Alien Spell dispatched his saucer after them. He managed to hold one of the fighters in place so he could attack it. Alien Spell managed to retreat from the Ultra Garrison. Later that day, Alien Spell was seen attacking a young boy in the forest. He was quickly shot at by the Ultra Garrison. Alien Spell grew once again and started a new battle against the Ultra Garrison. As the battle started to become grim, Dan turned into Ultraseven. Even with the assistance of his saucer, Alien Spell was of little match for Ultraseven. The flying saucer was then destroyed by the Ultra Garrison. Without any other options, Alien Spell attempted to flee. Ultraseven used his Eye Slugger to slice Alien Spell in half vertically.

Figure of Alien Spell by Bullmark 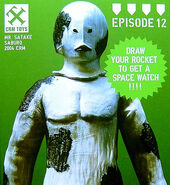 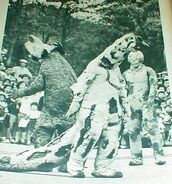 Alien Spell together with Agira and Eleking