None
Alien Simon (サイモン星人 Saimon Seijin) is a race of aliens that appeared offscreen in Ultraman Ace. A single Alien Simon appears in the final episode, but is later revealed to be a disguise of Yapool.

At some point in the past, the Simons had been attacked (and possibly controlled) by Yapool. As part of his plan to defeat Ace once and for all, Yapool impersonated a juvenile Alien Simon to evade detection. He first pretended to be targeted by Yapool in order to get closer to TAC. He later escorted some kids away to safety when Jumbo King attacked the city. To further the act, Yapool initially only spoke in the language of the Simon, but later he told Hokuto via telepathy that he is Yapool in disguise, and his true plan was to getting his revenge on TAC and Hokuto, and depriving the children's kindness. Yapool's disguise was finally defeated by Hokuto, shortly before he transformed into Ace. With Yapool defeated once again, Ace set off to battle Jumbo King, and soon destroyed the chimeric monster in the final battle. Yapool was forced into hiding, but kept on scheming in his own dimension. 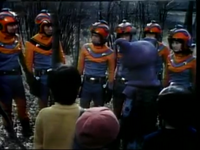 Add a photo to this gallery
Retrieved from "https://ultra.fandom.com/wiki/Alien_Simon?oldid=510111"
Community content is available under CC-BY-SA unless otherwise noted.