None
Alien Shilback (シルバック星人 Shirubakku Seijin) is an alien race that first appeared Ultraman Dyna episode 17 "The Ghost Space Ship". Despite this, these aliens were never shown alive, as they were killed by Zombayu while the rotten corpse of the crew's captain was possessed on a journey from Planet Janarunba to Planet Shilback.

The Alien Shilback had legends about a monster named Zombayu, who was an actual creature. Zombayu killed the crew of the Shilback spaceship and possesed the corpse of the captain. The monster used the zombie alien to fly the ship before transforming into his true giant form. 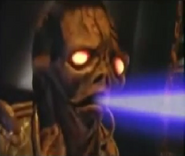