Disguising himself as an assistant to a seismologist, Alien Shaplay and his monster, Giradorus were on a mission to retrieve Ultonium a stone that made up the core of the earth.

In the film, a Reionics Alien Shaplay was sent by Ultraman Belial (along with a select few monsters that belonged to Belial) to keep anyone from reaching the Plasma Spark Tower where Ultraman Taro was protecting the last trace of energy to keep the planet alive.

Appearing with Belial's batch of monsters, (Dorako, Bemstar, and Saramandora) Shaplay confronted Rei and Mirai on the now abandoned and frozen Land of Light and fought Mirai, eventually damaging his Mebium Brace. A short time into their battle, Rei and Mirai were saved by Dan Moroboshi, who sent his capsule monsters to battle Belial's monsters, and Shin Hayata, who incapacitated Shaplay by blasting him into a wall of ice that collapsed on him.

Alien Shaplay along with Alien Magma are mercenaries hired by Gina Spectre who swear their allegiance to as they join Gina in witnessing the arrival of her brother Mold from another dimension.

Shaplay was soon tasked along with Magma to guard Ultraman Victory's host Sho as he was soon tied up and mouth guarded by Mold. While happily stating that they would take over the universe with the Gua Army, Sho escapes and uses his Victorian abilities to knock down the aliens.

While looking for Sho, they came across Arisa and Asuna, fought them and won, while Mold fought Ultraman X. Magma then turned giant and left the women with Shaplay to deal with. After Mold, along with a giant Alien Magma, got hit by a EX Red King bullet fired from Sho's Victory Lancer, the Gua Army retreated and Shaplay, along with Magma, were whipped and scolded by Gina until Mold told her it will be time to meet the Gua Army.

Shaplay, along with Magma, Gina, and Mold, stood by to watch the Gua Army gather to Earth until Xio interfered and X and Victory arrived for a rematch as Shaplay and Gina fought Xio and Arisa. However, after Alien Magma was defeated by Victory and Ultraman Ginga showed up and turned the fight against Mold Spectre, Shaplay along with Gina retreated.

Shaplay volunteered to find more soldiers for the Gua Army by contacting Alien Markind and he offered Mecha Gomora's Spark Doll and a Spark Doll detector for a price but Shaplay refused and shot him to death. They soon let Mecha Gomora loose near a factory and ambushed Hikaru and Sho before they can transform to stop him. Shaplay finally met his end after he defended Gina from a King Joe charged bullet and got destroyed in the process. End of the Rainbow Sword of Victory The Shining Sky, and the Land Beneath It

From outer space, Katarohi (カタロヒ Katarohi) plans to turn Earth and humans into living farm through distributions of Slimtonium. He did so by disguising himself as a street jewel monger Takahiro (タカヒロ, Takahiro) and sold the smaller crystals to women, among them being Ittetsu Shibukawa's daughter. When Shibukawa caught wind of his plots, Takahiro was forced to unveil his disguise and harnessed the energy to Bemular (Empowered). As Bemular battled Orb, who had risen to fight the creature, Katarohi proceeded to battle Ittetsu. The alien fiercely toyed with him, using the crystal to control Bemular while countering Ittetsu's every move.

Eventually, while both Shibukawa and Orb were down, the two who rose up to defeat their opponents, with Orb transforming into his Origin form and disabling Bemular's signature attack, and Ittetsu using his martial art skills to put Shaplay in a choke hold, effectively making the villain beg for him to let go. Orb proceeded to finish Bemular off with the Orb Flame Calibur, while Shibukawa fired his pistol at a set of oil barrels, both finishers caused an explosion that defeated the villainous duo of Shaplay and Bemular. That night, defeated, Katarohi wandered the grounds he had fought upon. He stumbled across a newly clothed Jugglus Juggler, donning a snake heart theme. As a blood moon rose, Juggler struck Shaplay down, killing him once and for all. Hard-Boiled River

Though not appearing, the Alien Shaplay race was mentioned by RE.M..

Wanting to experience Leito Igaguri's life as a salaryman, RE.M. provided Riku Asakura with the Shaplay Metal badge that allows him to disguise as Leito. This badge as well extends to Pega's influence, allowing both people to pose as Leito when needed with the latter capable of entirely shrouding his appearance in public. After a day working as a salaryman, Riku still doubted the badge given by RE.M., although she is obligated to every orders that Riku provided.

Alien Shaplay reappeared in the puzzle role-playing game for mobile devices, Ultraman Galaxy as a C (Common) card that you can unlock him in one of the levels in the game with a high chance of getting Shaplay. 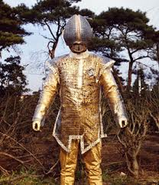 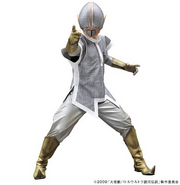 Alien Shaplay at the bottom 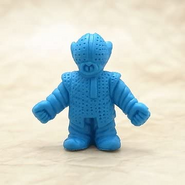