Ultraman Max episode 36 "Alternate Dimension World"
Alien Shamer (シャマー星人 Shamā Seijin) are aliens from the planet Shamer that appeared in the TV series, Ultraman Max. They appeared in episode 18 and 36.

One normal day as the sun set, a couple found that there was an additional sun. DASH was trying to investigate the situation and discovered that it was a UFO. Meanwhile, a man calling himself Shamer came unannounced to Base Titan. He at first seemed like a friendly alien but he later claimed that earth will be under the control of his race. The captain tried to tackle the alien but the disguise was a hologram. Another Alien Shamer teleported from a spaceship but giant sized and started terrorizing a city. Ultraman Max tried to deal with the Alien Shamer but he proved to powerful despite being an oaf and fighting in a comical way. Max retreated and the agent gave DASH three days to think the surrender over. At one point DASH turned off the lights in the control room and it is revealed that Alien Shamer are tiny in size. Alien Shamer cannot hide their bodies in darkness and like a plant need sunlight to stay active. The giant Alien Shamer was held off by Max while a DASH member, Mizuki fired missiles at the UFO. After the reflecting UFO blew up, both Shamers reduced in size and were forced to live on Earth. Bright World

Months later, Alien Shamer returned to get revenge on DASH in the guise of a scientist named Dr. Yotsuya and he began work on a Dimensional Ray Gun. After the appearance of Red King and Pigmon, Alien Shamer was exposed for who he was and fled Base Titan. While Red King appeared again, Alien Shamer went to a rooftop to send Ultraman Max to another dimension with his weapon, but instead shot the Android Elly (whom was possesed by Pigmon.) Sean of DASH used his newest invention called Black Dimension to enshroud the building with darkness, reducing Alien Shamer's size to a few inches. He was later caught and eaten by a cat due to his small size, bringing an ironic end to the would-be invader. Alternate Dimension World 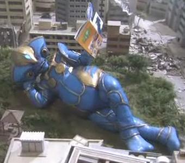 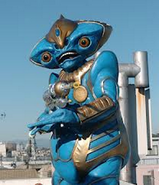 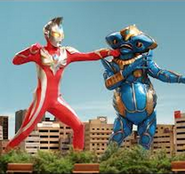 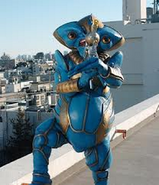 Alien Shamer in a stage show
Community content is available under CC-BY-SA unless otherwise noted.
Advertisement